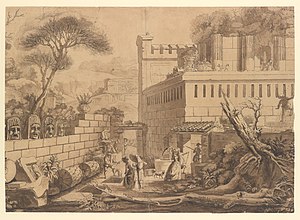 Visitors inspecting the nearby architecture.

A visitor or guest is a person who comes to the site at random to drop by at a location, which includes taverns, libraries, and temples. Some may seek permanent employment. Initially, a fortress will receive only about three visitors for a given location. First guests will initially visit out of curiosity, and when they leave, they bring back word of what the place is like. If the location proves to be popular and not deadly, it will attract more visitors. "Visitors" do not include merchants, diplomats, wild animals, or invaders.

The arrival of a visitor is notified in the announcements. Visitors are listed in Others on the unit list and labeled as Guest on the right side of their names, along with their current activity.

Visitors provide protection and social interactions for citizens. Visitors are also a source of rumors, which they bring and spread from site to site, including the player's fort. Several downsides to visitors include overcrowding, alcohol depletion, accidental conflicts with citizens, and FPS issues from the increased population. Players wanting to remain an isolated fortress should restrict locations to Citizens only to prevent people from visiting them, and shouldn't reveal a cavern, as its discovery will bring monster slayers.

Visitor population cap is set to 100 by default, and can be modified in d_init.txt from [VISITOR_CAP: <number>]. If set to 0, visitors will not come at all. [VISITOR_CAP] does not count long-term residents.

A visitor's current activities, objectives, and type can be investigated by pressing vg and hovering over it. The visitor must first interact with the locals before the information can be shown. Generally, visitors wanting to petition for residency are described as "seeking work", and typically call for meetings as soon as they arrive, unless there is another meeting taking place. Visitors who came to "relax" will socialize and partake in performances in taverns. Visitors described as "ready to leave" means they are exiting the map.

Visitors do not need to eat, drink, or sleep, but they receive alcohol from tavern keepers. Inn rooms are used for long-term residents only.

Guests are initially friendly to citizens and other guests. Drunk or otherwise violence-oriented visitors — particularly goblins, due to their ethics — may start arguments which can escalate into potentially-lethal brawls, or even loyalty cascades. Visitors side with the attacking force of their own civilization. On the other hand, in non-player sites, visitors can be drafted as defenders against invading armies (including your own missions).

Their current activity can be viewed in the unit list next to Guest /. Visitors with No Activity either means they are leaving, have just finished an activity, or have no location available to do their activities. Visitors can wander into other locations, but do not do activities that they did not come for. For example, visitors coming to relax will only socialize at a tavern and do not do other activities such as reading books or praying. Visitors must become long-term residents in order to do other activities in different locations.

Visitors leave after they complete all of their activities.

This visitor has come for diplomacy and to relax.

Foreign diplomats arrive to your fortress for a multitude of reasons. Once their meetings are done, they will linger around your locations, sometimes for many months until they finally decide to leave. They are often followed by a pair of bodyguards who will defend them if they are under threat.

Mercenaries come to enlist in the military, or to relax at a tavern. They can petition for long-term residency, and once accepted, they can be added to any squad (note that they cannot be squad leaders) and will follow any order the squad receives.

This visitor has come to slay beasts.

Monster slayers and beast hunters seek wild creatures to kill, or just to relax at a tavernv0.44.01. Monster slayers start arriving after a cavern is revealed; there does not need to be an unrestricted/public location, such as a tavern - the discovery of a cavern is enough.

Monster slayers go down into the caverns alone to slay subterranean creatures. Beast hunters remain above-ground and hunt wild animals, similarly to hunters.[Verify]. Neither can have any labor enabled, but they are another able (and expendable) body if something unpleasant gets to where they are.

This visitor has come to perform.

Performers, as their name suggests, visit taverns to perform for other guests and citizens. They tell stories, dance, make music, or recite poetry. They do not ask for anything in return for their performances. They may seek long-term work.

Groups of performers under a single name may arrive as a performance troupe, and when petitioning will apply as a group. Allowing the petition will allow all of its members. Troupes may be made up of several bards and poets. Attacking or killing one member of a troupe does not automatically turn the rest of the group hostile. Due to a bug, troupes may arrive completely nakedBug:9234 .

This visitor has come to study.

Scholars come to study in a library, which includes reading books and discussing topics with other scholars. If writing materials are available, they may use them to write their own books. While visiting scholars can depart with one or more of the local books from the library, they can also leave books that they have carried or written, thus encouraging new content in the book collection.

Travelers have no special purposes, and most only come to relax. Some may seek sanctuary if they were liberated from a site during missions. Travelers who seek sanctuary will be able to petition even if there are no locations assigned that allow visitors.

Warriors frequently visit the tavern to relax. They come armed with weapons and armor, so it is ill-advised to fight them. Most warriors are traveling questers, seeking rumors and asking questions regarding the location of their target, which is usually a lost artifact. Otherwise, they come to provide specific services.

Other types of visitors may come, such as prophets, monks, pilgrims, peddlers or petty criminals. They are for the most part identical to travelers, though sometimes they are agents assuming fake identities in order to scout your fortress for items of value.

Questers will visit your fortress as representatives of a foreign entity, usually looking to retrieve an artifact. They are usually warriors, i.e. mercenaries. They go through your tavern first to gather informations from chatting other patrons, then leave after they've learned what they want. If one of your dwarves can't hold their tongue and reveals the presence of an artifact they're looking for inside your fortress, they will usually make more pressing demands or even attempt to steal it. Visiting questers will leave after a while regardless of what they learn or how much they socialize.

Agents will visit from hostile civilizations to spy.v0.44.01 They assume cover identities and gather information concerning artifacts, then leave to report back to their civilization. Agents cannot be forced to reveal their true identities, but players can distinguish them from other visitors by closely inspecting their names, roles, and equipment. For example, an agent might arrive at your fort claiming to be called "Urist McBard" despite being an elf carrying only weapons and armor, with no bard skills whatsoever.

Visitors can petition to stay for a long time. When visitors request for long-term residency, they attend a meeting with the mayor at the mayor's office. Once the meeting starts, the Petition notice will flash on top of the screen. In the petition screen, their purpose to stay is displayed, and players can have the final say on whether they become a resident or not. Currently there are four reasons to stay: "eradicating monsters", "entertaining citizens and visitors", "soldiering", "study".

Having finished their requirement, visitors whose petitions were not accepted will leave immediately after the meeting, unless they came for additional reasons.

Long-term residents can apply for citizenship after living in the fort for about two years. Accepting the application will allow labors and occupations assigned to them.

To assign them occupations, the fort-wide occupation they initially had when applying for long-term residency must be unassigned. Go to the locations menu, and on the first screen, select their name from the fort-wide occupation list, press Enter to reassign, and choose Nobody. After this, the new citizens will become available for other occupations. Mercenaries, monster slayers, and beast hunters will never apply for citizenship, though any other visitor types can become a militia captain after citizenship, effectively making "all-visitor" squads possible.