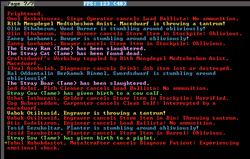 means that the game will pause and recenter upon the announcement of migrants arriving. You could change it to

These are the simplest and most common announcements, and will flicker through the announcements window very quickly. This is typically used for things that happen a lot in a well-developed fortress, including:

These announcements are more important than minor announcements, and in addition to playing their message will pause the screen and zoom to the place of the event. This is used for things that happen rarely but aren't the most important, including:

These announcements pause the game, zoom to the location, and present a message box detailing the occurrence, in addition to repeating the message contained therein in the main feed after you close the box, for good measure. These are reserved for incredibly rare, and potentially once-in-a-playthrough events, including: