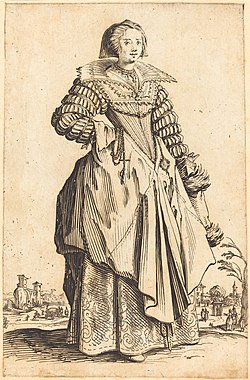 A human noble from times past. 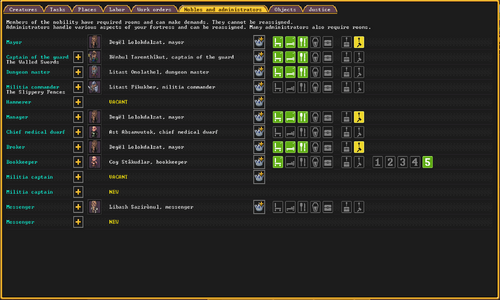 The nobles menu, displaying a variety of positions. Those with room requirements are fulfilled, while the Mayor has a pending mandate.

The Nobles and administrators menu, opened with n or the sixth menu button, contains a list of the noble and administrator positions of your settlement. At the top is a description section, which may change to provide detail when hovering over different elements.

Each list entry contains the following columns (from left to right):

Appointed nobles are chosen by the player via the noble menu (though technically in-universe, they are being appointed by higher-ranking nobles; see below). There are certain skills that are relevant for each appointed noble's job, and not all dwarves will gain experience in the given skill; some dwarves will never gain experience in certain skills, this is determined by each dwarf's personal traits, and it is therefore important to select the dwarf with the appropriate set of traits for each position.

There are two basic kinds of nobles: civ-level and site-level. Positions with the [SITE] tag are site-level, those without it are civ-level. These types of nobles can be regarded as completely separate systems; with the lone exception of LAND_HOLDER related appointments (which have their own specific rules), civ-level nobles cannot appoint, succeed, or be replaced by site-level positions, and vice versa.

Outside of fort mode, the game will always attempt to assign nobles whenever possible (except for those with NUMBER:AS_NEEDED). So the rules for when nobles appear are controlled by the tags which limit them.

Positions that have no requirements will automatically be assigned to a random civ member when a new site/civ is created. A position that requires a certain population will not appear in fort mode unless it has [APPOINTED_BY] or [ELECTED], probably due to a bug. In worldgen, there is no functional difference between ELECTED and no appointment rule except that ELECTED nobles tend to have high social skills and/or skills related to the position, while non-elected ones are assigned randomly. If a noble dies or advances to a new position via succession, the position will be granted to another unit based on the [SUCCESSION] tag. If they have an heir or the position exists, the unit will be assigned. If not, a new one will be appointed according to the usual rules. It is possible to assign multiple levels of SUCCESSION:BY_POSITION, creating a line of positions where the death of one causes all those "below" them to advance.

[REPLACED_BY:position] means that once the replacing position is available, the current position will disappear. As mentioned, site-level and civ-level positions are completely separate; a site position cannot be replaced by a civ-level one or vice versa.

These rules are followed in worldgen. It is possible to cause civs and individual sites to change their behavior substantially when they reach a certain size by controlling nobles. For example, if a site can only appoint a position with [MILITARY_GOALS] after reaching a particular size, that site will not send armies on missions until the required size is reached.

Another interesting point is that a civ-level LAW_MAKING position is required for the civilization to have any kind of cohesion. Without it, sites will be constantly embroiled in territorial disputes and civil wars will be commonplace.

The way DF determines what positions will actually appear in your fortress is somewhat counter-intuitive and fairly limiting. This guide should help you understand what you can do to actually get your positions working properly.

There are five tokens governing which positions appear in your fortress - LAND_HOLDER, REQUIRES_POPULATION, APPOINTED_BY, ELECTED, and REPLACED_BY. The first two determine when your fortress is eligible for a new position, the next two determine how a new position for which your fortress is eligible can be added, and the fifth allows you to clear up obsolete positions. Unfortunately, they also interact in some strange ways that makes creating interesting position structures difficult.