A tomb is a resting place for the dead. "Tomb" has several meanings in the game: it can refer to a site, a structure, or a room.

A tomb is a room designated from a coffin (also called a casket or sarcophagus). A tomb can be assigned to a specific dwarf, or to no dwarf at all. The primary function of tombs is to keep nobles happy: certain nobles demand their own tomb, and the more self-important the noble is, the higher the quality they will require. In some circumstances a noble will get an unhappy thought if an "inferior" dwarf has a higher-quality tomb, however it is unclear what quality threshold the tomb must be to trigger the thought. Nobles may also store certain favored objects in their tombs.

The quality levels of tombs go as follows:

Dwarves that have been assigned to tombs will retain all of their possessions when they die, and other dwarves will place them in the tomb - it can be a good idea to keep a chest or cabinet in the tomb to ensure that all of the items fit; otherwise, all of the dwarf's possessions will be inherited by his/her spouse (if one exists) or simply become unowned.

Making a tomb for every dwarf in your fortress can be time-consuming. More convenient than creating tombs for common dwarves is to designate coffins for burial – a dwarf who dies will be placed in a randomly available coffin set for burial, unless he or she has a tomb assigned. This reduces negative thoughts and eliminates miasma. Of course, it's also important to make sure that the dwarf doing the burial isn't running into the middle of a battlefield to do so.

Humans will build structures known as tombs, where they entomb their rulers and military leaders along with various treasures. They can be found underneath towns via catacombs, or above-ground in specially constructed sites, which are also called tombs and marked as 0 on the world map. Above-ground tombs take the form of pyramids or towers that vary in size (small to enormous) and internal composition. The entrances are kept locked and have the option to be picked or bashed open. Bashing the door destroys it completely, while picking the lock just unlocks it (and cannot be performed if it was linked to a lever). Upon entering, trespassers will be greeted with a messaged slab with one of the following warnings:

A tomb consists of rock chambers and hallways, with hidden weapon traps randomly set on the floor. It is recommended to raise your observer skill to spot traps before walking on one and triggering it. Loot, such as weapons, clothes, and crafts can be found lying around. All items possess a +fine+ quality or more.

One of the rooms contains the royal chamber that has a single coffin placed at the center, with a grave slab nearby, and typically surrounded by a lot of skeletons. This coffin, if disturbed, may quickly prove to be very fun.

Tombs may host a number of artifacts, and, as such, can be raided in Fortress Mode. Doing so, however, is likely to provoke the ire of their residents. 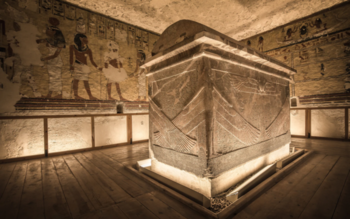