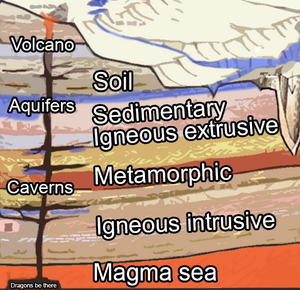 There are four types of stone layers in Dwarf Fortress, very much based on real-life geology (see below). Stone layers are roughly homogeneous layers of rock, composed of the same kind of stone, that usually contain different ores. Each stone layer has its distinct markers and qualities; sometimes a clear dividing line can be drawn between two biomes from the stone layers underneath, sometimes not. Digging deeper, or into another local biome, will reveal differences between the layers' contents and a progression from sedimentary down to igneous.

These changes are usually quite sharp; fifteen layers may be mostly quartzite, but the next thirty may be dominated by gabbro. Three-dimensional variance is planned for the future, but for now, changes between stone layers also mark changes in ore and gem content. 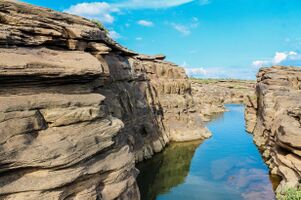 The sedimentary layer has an 80% chance of being the first stone layer that appears after any soil. It will include any lignite or bituminous coal, if you are lucky enough to have some. Iron ore and all but one of the fluxes is common here as well, making the sedimentary layer make-or-break for steel production. Note that this layer and the igneous extrusive are mutually exclusive, and will never be found in one place. Sedimentary layers are generally where the bulwark of the fortress will find itself, will contain most of the ores marked on the embark screen as "shallow metals", and is a good choice for exploratory mining.

Note, however, that it is poor in gem content - those found in sedimentary layers are generally less valuable than those further down. Some types of sedimentary rock may contain an aquifer.

This is the deepest and often the widest level, and leads directly into the magma sea. Gems here are generally the most valuable, on average. The most valuable of them all, colored diamonds, are found within faint yellow diamonds within kimberlite within gabbro layers.