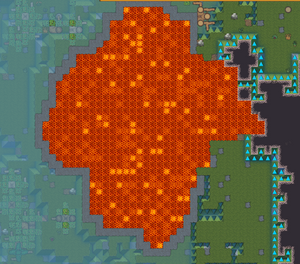 Volcanoes are one-embark-tile features, meaning that they can be surrounded by any biome. On the Region embark map, they are represented as a red raised caret (or circumflex) (^), the same symbol as a weapon trap in-game. On the Local embark map they are represented as the "approximately equal to" symbol (≈), the same symbol that represents magma in-game. On a standard world map, there will generally be only a few volcanoes.