Chasms are a feature that appear infrequently in mountainous biomes. They are a cave system identified by not having a floor on the lowest level (which is instead marked # and described as "Chasm" when looked at).

Chasms come in two forms: standard chasms, which look something like a river system (a bottomless "Grand Canyon"), and "bottomless pits", which are like a magma pipe without the magma. Chasms may either be open to the sky, or fully underground and not visible until breached by a miner, at which point the entire chasm is revealed. When this happens, the game will pause with the announcement "You have discovered a large chasm cleft through the mountain." or "You have discovered a deep pit in the mountain.".

Chasms are not visible on the Region/World maps or the Local maps by default, but can be turned visible by setting SHOW_EMBARK_CHASM (for tributaries) and SHOW_EMBARK_PIT (for pits) to ALWAYS in init.txt. They must also be set to be shown during world generation. On the local map, standard chasms will show up as # (usually a line of them) and a bottomless pit as ○.

The presence of Extreme Cliffs (20+) on the Local Map is sometimes indicative of a chasm, though this may be coincidental.Verify

The beginning of a standard chasm appears similar to the fringed tributary section of a brook sometimes seen in mountain areas, and the rest looks pretty much like the watercourse of a brook or river (though with small caves in the walls). Appears as # on the embark map if enabled.

Chasms appear to be very hot; testing in the Object Testing Arena has shown that water will turn to steam if dropped into the chasm. 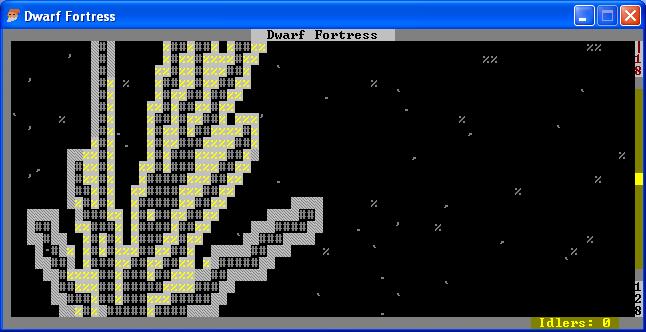 Note: See Pit for other uses.

A bottomless pit, also called a vent chasm, has a similar appearance to a magma pipe, except it does not contain magma. Appears as ○ on the embark map if enabled. 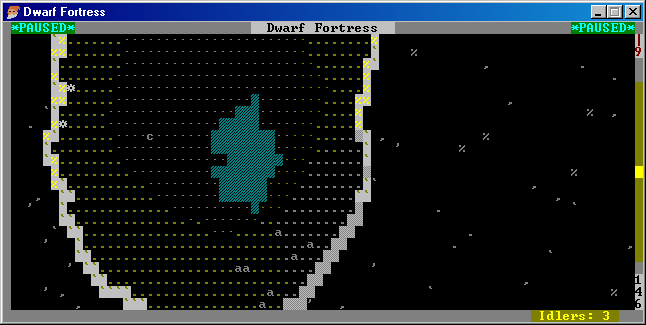 Chasms provide a convenient method for permanently disposing of any unwanted items. Simply designate a garbage dump activity zone on a walkable tile adjacent to the chasm, then mark your unwanted items for dumping. Standing orders can be used to automatically dump particular types of refuse. If the chasm is inhabited by creatures, dwarves may cancel the dump task if the creatures are too close, even if they are technically unreachable.

A technique of dumping by building a platform over the chasm, and then severing the platform from the wall, to permanently dispose of garbage, excess stone or nobles set on top. The severed platform will disappear into the darkness below, never to be seen again.

Chasms are frequently home to cave spiders and purring maggots, making them a potential source of silk and dwarven milk. As the chasm exposes every layer to view, they provide access to easily identified resources such as ore deposits and gems.

Dwarves fighting near the edges of cliffs have a propensity to dodge right off the precipice, falling to their deaths.

Creatures will spawn near chasms every time you enter the region, leading to the death of any fortress you visit. This only applies to adventure mode. A sure formula for fun!