The dwarven calendar is used to display the day, month, and year of any given date, and is visible in the upper right corner of the status screen (z). During game-play in fortress mode, however, the layout of the date is YY-MM-DD. There are 12 months in the dwarven year, divided into 4 seasons of 3 months each. Unlike the traditional Gregorian calendar, each dwarven month is exactly 4 weeks long, or 28 days, for a total of 336 days in a year. New Year's Day and the first day of Spring both fall on the 1st of Granite. New Year's Eve and the last day of Winter both fall on the 28th of Obsidian. The months are named after kinds of stones, ore, gems and wood.

The game's first playable year begins whenever the world stops generating - by default, this will be year 100. Worldgen can be set to stop at several distinct years ranging from 5 to 500 when selecting Create a World, and can also be set to any arbitrary year by editing the advanced option End Year in the Design New World with Advanced Parameters screen, or by interrupting world generation.

The world follows a seasonal cycle - each season affects the climate, the crops that can be farmed, and the ebb and flow of trade. There are also full moons on certain fixed dates every year, during which werebeasts will transform into their werebeast form on these days.

Civilizations will visit your fortress based on what season it currently is. Trade caravans for each race show up during the specific seasons each year, with the elves arriving during the Spring, the humans during the Summer, and the dwarves during the Autumn. No caravans arrive for the winter, so it's smart to stock up on food and drink during the fall.

In addition to the year, a world's history is also divided into ages. An age can be seen as an epoch, something which defines the period of years it describes. The age itself has no bearing on gameplay other than as categorization in Legends mode, though players may witness a change in age (with an accompanied announcement) should their actions cause the current age to end. This may happen after killing a large number of megabeasts.

Ages are determined by the states of the world during world generation. Worlds start in the Age of Myth, though this may not always hold true if changes to world gen parameters are made. Some of the known things that influence the ages are number of megabeasts currently living and dominant civilizations. It is also possible for a world to enter a particular Age more than once (e.g., The Second Age of Legends) if the appropriate conditions are met. 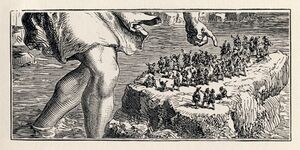 A time when Heroes, Mega-beasts and Titans walked the earth

Below is a list of 'Ages' that may occur, an explanation and their (possible) triggers, and their in-game descriptions. World size may affect how long an age lasts. Because the age is dependent on variables such as number of megabeasts, number of civilized creatures, etc., smaller worlds will tend to change ages more frequently. Conversely, larger worlds tend to be more age-stable.

In larger worlds, the proliferation (and extermination) of necromancers, vampires, and werebeasts during world generation can cause the age to "regress" back to Heroes, Legends, or, in slightly extreme cases, even Myth, sometimes multiple times.

If a world starts with 3 powers and manages to progress beyond that, it will proceed to the Age of Myth.

Once the Great Powers have fallen, the status of mortal civs will determine the Age. The ages will proceed as follows.

Toady One's quote from 2008 devlog: "I finally saw a world arrive at the Age of Fairy Tales, which happens if mundane creatures (ie humans) make up at least 90% of the world's civilized population with the requirement that there are still a few fantasy creatures lurking around. In this case, it was a kobold cave that their scouts never found. I guess all of the fairy tales were about people having their crap stolen."

A world that ends generation in the Age of Death or Emptiness will only allow games to be started in Legends mode or Adventurer mode.

Within the string dump, beneath these ages, are the following three lines:

It is unclear what these are used for.

A change in the season will generate an announcement. Depending on the biome your fortress is in, the announced season may be different from the calendar season. For example, in some biomes "wet" and "dry" seasons replace spring or summer. A few biomes lack any change in weather and those biomes announce a change of season by "-season- has arrived on the calendar." Regardless, plants and caravans always follow the calendar season listed on the status screen.