Blue diamonds are particularly rare gems, similar to black, yellow, red, green and clear diamonds - they occur only as individual gems within existing clusters of faint yellow diamonds which are themselves found only within kimberlite, itself found only within gabbro layers. Correspondingly, they are among the most valuable gems that can be found in Dwarf Fortress. 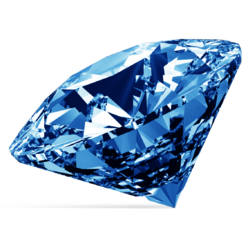 Blocky-limbed humans sometimes have an affinity for wearing diamond armor, although it is unknown how this armor is produced, seemingly without a workshop.

Contrary to popular belief, diamonds are not a girl's best friend, as they will usually leave her as the subject to constant kobold thieves, although this might be a good thing, as loss of the gem prevents goblin sieges, which could lead to unwanted tantrums