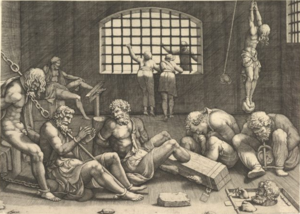 Restraints can be built from chains or ropes, despite the game asking for a chain, using the keys b + v. They can be used to tie up guard non-pet animals, prisoners, criminals or livestock.

A restraint is (technically) a 1-tile large building, a chain or rope which is used to restrain a dog, dwarf or other creature to a certain very limited area of movement. Unlike a cage, a restraint can only hold one creature, and the creature can move within a range of one tile from the location of the restraint itself, including up and down if stairs or slopes are in this area. This gives them, at most, a 3×3×3 cube of movement, limited as normal by walls, doors etc. Restraints do not block movement, including movement of wagons. While an animal is assigned to it the same as with a cage, using the q menu, dwarves can and will only be assigned from within the justice system. Sentenced criminals can be transfered from restraints to cages by using q on the restraint and removing the prisoner from the 'Assigned animals/prisoners' tab by selecting 'None'. The occupant will still be listed as restrained until the dwarf with the cage arrives.

Restraints can be used to keep a war dog or other animal near areas where you need constant vigilance and defense. Chained animals placed near the entrance to your fort will spot kobold thieves that can bypass traps and other passive defenses, pausing the game and announcing their presence. A pair of animals, placed opposite each other against the walls of a 3-wide corridor (so they cannot have more than 1 tile between them), are guaranteed to spot any thief that tries to enter, and (if combative) will similarly engage any hostile creature. But assigning a pasture for the guard animal is more resource efficient way to guard specific areas. This also allows the animal to walk away on its own if there ever is an alert that forces everybody to a certain area.

Restraints can also be useful in the meat industry, since animals on restraints can breed, unlike animals in cages. Chained animals are also available for training (when the appropriate zone has been designated around the chain). This can be particularly important for dangerous creatures that are only partially tame.

Restraints are also very useful in weaponizing otherwise untrainable creatures that you've managed to capture in a cage trap. Hostile creatures on restraints will no longer be aggressive to dwarves, which means semi-megabeasts, megabeasts, and even forgotten beasts can be chained up where a guard is needed as these will still draw aggression from invaders and undead, and will fight back when possible (within range of being restrained). Beware though, as forgotten beasts with special attacks like deadly dust may still use it liberally even if chained, and this can be harmful to dwarves. Restrained building destroyers may destroy nearby buildings, so they should be located a safe distance from anything destructible (including other restraints).

Currently, due to a bug, a restrained animal will keep the restraint on their upper body if it's deconstructed while the animal is still restrained. This can be used to "equip" your beasts with decorations, such as spiked chain collars or lavish ropes, but has no in-game effect.

If a creature falls down from a ledge while restrained, it will not be left hanging. Instead, it will be released from the restraint and keep falling.