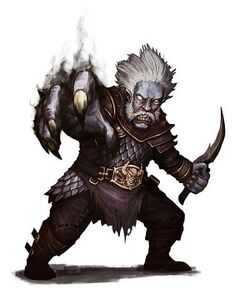 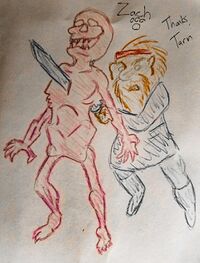 A drawing of a zombie and a dwarf by Zach Adams. All craftsdwarfship is of the highest quality. The dwarf is stabbing the zombie in the back. The zombie is smirking.

The animated dead (or undead) Ñ are the bodies of formerly living creatures animated through fell magic. These night creatures can be created intentionally by a necromancer, a mummy or arise naturally from the dark energies of evil regions. Animated dead are immortal and have no souls.

An undead may be formed of either the rotting husk, or the bones and shell of a being: the former is considered a zombie, and the latter a skeleton. While Dwarf Fortress has many kinds of creatures that are no longer performing the bodily functions of a living being (vampires, ghosts, mummies, intelligent undead, even necromancers to some degree), this article is focused on the mindless bodies, raised from death by the foul powers of individuals or evil lands, or enthralled by evil weather. Infected ghouls are similar to the common animated dead, but have their own article and a different tile color.

As long as the remains of a creature contain a body part capable of grasping, be it a hand, or head, or the entire upper half, those remains can be animated. This can lead to animated hands and heads, which seems comical, until you consider the implications of a swarm of such monstrosities and the havoc that they might wreak. Even some parts of creatures which should be incapable of autonomous movement can be raised, such as the hair or skin, or even mussel shells. These are, however, predictably nonlethal, mostly serving as B-movie terror monster 'fodder' to scare your dwarves into running around. A body part can be resurrected as a zombie even if it has already done so and been de-animated again. However, pulping damage (that is, "exploding into gore", "cloven asunder", "torn into shreds" and so on) to the head, neck, lower body, or upper body will turn the corpse into a "mangled corpse", ensuring that the zombie cannot rise up again. Likewise, destroying the structural integrity of an animate bodypart will stop its reanimation.

Unintelligent undead such as those created by a necromancer or raised by an evil biome have no concern for their own wellbeing. Such zombies will not attempt to dodge, block, or parry blows.

Certain kinds of evil weather can instantly turn any syndrome-vulnerable creature into a bloodthirsty undead killer, opposed to all life. These creatures are referred to by the sort of weather that transformed them, an identifier as a thrall, husk, or zombie, and their original creature name—for example, a stray guineahen unholy gloom husk. The specific procedurally generated syndromes of thralling evil clouds are functionally identical to that of animate dead, with the same extreme gains in physical stats, lack of pain or breath, etc. Similar entities called infected ghouls can be created by necromancers, which spread their form of the syndrome through their bites.

Because the interaction can happen without first killing the target, thrall-like creatures are hostile to one another and retain any armor or weapons they were carrying. Perhaps worst of all, they may still be contaminated with the material leading to the transformation, "infecting" those with whom they wrestle in a chain reaction that can rapidly destroy a fortress if they are not stopped immediately. 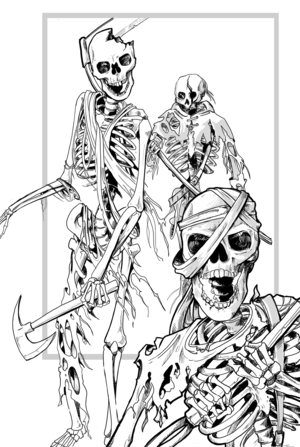 In the past, the undead were considered perhaps the greatest threat a fortress could ever face, only rivaled by the inhabitants of the hidden fun stuff. However, since the balance changes of 0.42.05, any battle against them will be much more fair. That said, the undead are not to be trifled with – they do not tire, feel no pain, have no useful articulations to damage, ignore injuries to their now-useless organs, do not fall unconscious, and are impervious to the effects of morale. Add in that they often arrive in very large numbers, using armor and weapons which make them even more powerful, and with necromancers to reanimate them, and that the greatest of beasts can be reanimated, and it comes off as no surprise that the undead can pose a great opportunity for fun.

The undead cannot bleed out - puncture wounds do little good for this reason, and likewise, choking is obviously ineffective against their lack of breath. Pulping or severing ("flies/sails off in an arc!" etc.) an important structural body-part (head, neck, upper body, lower body) is guaranteed to kill an undead. Blunt weapons are effective against animated corpses because they inflict pulping damage, mangling the zombies so badly that they cannot rise up again, without severing body parts that might reanimate. Of those commonly available to dwarves, maces are more efficient at pulping than war hammers. Flails are better still if one can acquire them. Beheading appears to sometimes work less reliably – this is possibly related to the neck being cut off rather than the head itself, which the game does not register as decapitation[Verify]. Cutting apart the physical form of undead can be dangerous if the source of reanimation is still active and present. The more body parts are about, the more fodder for animation is present. In this case, it is wisest to either butcher the corpses (if they can be butchered), throw them into magma, or pulverize them with a drawbridge, which will destroy the bodies so thoroughly that they cannot be reanimated again. A thrall may be "safely" fought with cutting weapons however, as long as there is no risk of infection at hand. Undead animals can be disposed of by cage-trapping them and trading them away to passing merchants. Crossbow bolts and other ranged weapons are essentially useless against undead of even moderate size, even if they can theoretically kill them if one of the previously mentioned important body-parts is destroyed by the shot. Against particularly small enemies like a kea or raccoon, bolts and arrows can be capable of severing limbs and ultimately finishing the job - but against anything more substantial like your average goblin, a squad of marksdwarves can spend multiple years, and quiver after quiver of ammunition, before ever dealing a lethal blow. This can be useful for rapidly training marksdwarves with a small number of targets, but may be undesirable if you're making a last stand, or had intended to thin the horde before the melee started.

Undead from necromancer sieges may carry equipment, including weaponry and armor. While such undead will neither block nor parry, they are perfectly capable of using their weapons to inflict damage upon your dwarves, and the armor they carry makes them much more difficult to put down. Against an armored zombie, hammers will be more effective than maces, as they have higher armor penetration while still inflicting blunt damage.

Evil weather thralls may require utmost caution. Any thrall carrying a melee weapon or armour (let alone any combat skills of its own, which it will retain the use of) can dispatch a full squad in short order even with average combat skills, making direct confrontation an unwise choice – Armok help you if the thrall in question used to be one of your best soldiers. A particularly dire possibility is that, if the responsible evil cloud is in dust form, the thrall is still contaminated with whatever substance transformed it. If this is the case, any dwarves sent to fight the thrall will become thralls themselves if the thrall tries to wrestle them. From there, the new thralls might spread the contaminant further still, which can easily lead to a full-fledged zombie apocalypse.

Of course, the undead do not have to be beaten through direct combat - traps and atom smashers are among the many indirect ways to neutralize them. Magma, that classic solution to all dwarven problems, is another effective weapon, as is fire in general. The sheer heat of magma will eventually destroy the corpse, rendering it unable to rise again - it kills zombies fairly slowly, though.

As unintelligent undead do not make any attempt to avoid attacks, they are particularly susceptible to even low-quality weapon traps. This property can be exploited in trap design, as no-quality weapon traps will still be lethal to the undead hordes, while typically allowing the horde's masters to leap out of the way, potentially somewhere nice.

Discipline is a big obstacle to directly confronting a zombie horde. Without enough discipline, a troop sent to fight them may instead decide to flee in terror from such... abominations of nature. As you may imagine, this can lead to endless amounts of Fun, for, unlike your dwarves, the undead cannot feel fear or any other emotion, and any dead dwarves may, in turn, rise up and add to the horde's numbers. It is important that any undead-fighting squad consists of severely hardened and disciplined soldiers. Any soldiers you bring to embark on an evil biome should have at least two points in discipline, as morale is currently buggy and leads to ordinary dwarves fleeing even from living wildlifeBug:7161. This may also be worked around with a little modding, by adding at least [NATURAL_SKILL:DISCIPLINE:1] to all civilised races and trainable pets. Additionally, the very act of fighting undead makes dwarves more vulnerable to insanity (particularly if the undead was acquainted with the dwarf fighting it in its former life), which must be countered with as many sources of good thoughts as possible.

Reports have been made of zombies animated by the ambient evil of a region deanimating on their own when wandering away from such a vile place. However, there are also reports of undead wildlife being encountered in areas bordering such places.[Verify]

Undead caught in cage traps can be used to rapidly train marksdwarves, or for fortress defense and executions if you are able to recapture them afterwards. They are hostile to every living creature, including siegers, megabeasts, forgotten beasts, hippies, snatchers, annoying residents, and cavern inhabitants. Build a cunning trap involving caged undead elephants, and release them upon an unsuspecting victim! Zombie elephant insurance not included.