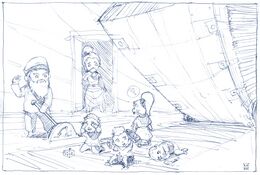 Before they grow up to realize they're in an unwinnable game.
Art by Devilingo

Most creatures, including dwarves, start out as infants, then after a certain number of years become children, and after that become adults - for dwarves, childhood starts after reaching one year of age, and continues until age twelve.

In fortress mode, some migrant dwarves are married and may bring children. Children who immigrate to your fortress might be any age from 1-12. You can determine the age of any child by viewing their thoughts screen, which will give you the child's exact age as well as their date of birth. This information is visible regardless of whether or not the child was born in your fortress.

"Resident" heterosexually married female dwarves may also give birth to children. This can be stopped or reduced by editing the BABY_CHILD_CAP or the STRICT_POPULATION_CAP setting in d_init.txt. Dwarves can even have miscarriages (if they become dehydrated, starving, or are subjected to certain types of physical trauma), which causes an unhappy thought for the mother but not for the father.

Much of goblin society is centered around stealing the children of other races. The appropriate response to a baby-snatcher appearing on the map is the judicious use of dwarven diplomacy.

Babies do not have to be born in beds, but are born wherever the mother happens to be, which will interrupt most current actions of the mother. The game will pause and announce the arrival of the baby. The mother will cancel whatever task she was in the middle of to seek her infant, and then will usually resume whatever task she was doing before the child was born. Dwarven mothers can also give birth to twins or triplets, although that is exceedingly rare (1 out of 500), due to their [MULTIPLE_LITTER_RARE] token. Babies are looked after by their mother, who will continue working while carrying the babies.

Unconscious mothers will not wake up when they give birth – sleeping and resting in a hospital will not be interrupted. Dwarves in a strange mood will also not interrupt their mood when giving birth – cancelling a mood forces instant insanity, so it is likely a coding choice to protect mothers (and children). Imprisoned mothers can grab their child if they give birth while on a chain, but cannot retrieve an infant that is out of their reach, which can cause massive problems, since a mother carrying a child is forced to drop it before being brought to prison.

If the mother is sleeping or otherwise prevented from collecting her infant, the baby will be free to roam as it pleases. An emancipated baby acts in a similar manner to a raving mad adult, wandering freely over the map without any sense of self-preservation, gravitating to meeting zones. It may be fed and watered by other dwarves, and in recent versions, such care happens regularly enough to keep orphans alive. As long as a baby is not within reach of a hostile creature, no harm will be done to it. "Job cancellation spam" can be generated as the baby is seen by the game to be "insane" (example: "Urist McBabyname, Dwarven baby, cancels Clean Self: Too Insane"), but once it reaches childhood (at 12 months), that will stop, and they go about their business like any other dwarven child.

The sex of a baby is determined upon birth. Reloading a save might get a baby of the other sex.

After giving birth, it is possible for the mother to become pregnant again immediately, and give birth to another child nine months later.

Babies will crawl to burrows when assigned to them.

Any baby being carried by its mother will effectively leech food and drink from her, causing her to become hungry or thirsty at double the usual rate. This does not, however, count as alcohol consumption – when a baby is close to 1 year old, it will have severe withdrawal.

In fortress mode, children cannot be assigned any labor, but they will perform a few simple tasks on their own, such as:

If no tasks are available, they will gladly loiter in meeting areas, like dining rooms for example, for the duration of their youth. Children born in the fort tend to follow their mother by preference, even (especially?) if their mother is a soldier and is currently going into battle.

Children are also known to be invisible to vampires, thus making excellent crime detectors, as they speak truthfully in all cases.

The game will create an announcement when children reach adulthood and can be assigned labors. This announcement will not pause and/or center the screen by default.

In the eighth DFTalk, it was mentioned that, due to a programming oversight, children's parents can become so preoccupied with finding their children that they can die of thirst.

If there are too many children in the fort, FPS may suffer. Removing children is difficult, as doing so may quickly lead to stress. One possibility is to burrow children outside to aid snatchers. To prevent a large population of children in the first place, it is preferred to set the BABY_CHILD_CAP and/or the STRICT_POPULATION_CAP in the d_init.txt file.

Humans, goblins, elves, kobolds and subterranean animal people follow the same aging progress of dwarves (born as babies, becoming children at a year old then becomes adults at twelve). The same is true for some races of wild humanoid creatures and semi-megabeasts, though some possess shorter or longer child states than dwarves do, i.e. trolls become adults at the age of 10. Regardless of how long their child states are, intelligent non-dwarf children are functionally identical to their dwarven counterparts for gameplay purposes.

Young animals possess limited capabilities compared to their adult stages. Infant milk-bearing livestock can't be milked, young wool-bearing animals can't be sheared, and bird and reptile hatchlings are unable to lay eggs. However, unlike intelligent creatures, almost all animals follow a different aging progress; they skip the baby stage entirely and are born as children, who become adults at only 1 year of age (though they usually don't stop growing in size until the age of 2). Certain exceptions exist, however, such as elephants, who take 10 years to reach adulthood. Savage animal people versions of these animals follow this same aging progress.

Certain creatures possess no child state to speak of, and are technically adults at birth, having all the capabilities of an adult immediately after starting existing (though most of them are still subject to growing in size as they get older). These creatures include stuff like all species of snakes, crundles, giant cave spiders, creeping eyes, magma crabs and most megabeasts. Inorganic creatures such as gabbro men, fire men and amethyst men also exist only as adults and never as children. If the creature born as an adult is an intelligent creature, they'll be born with generally mild levels in some skills.

Creatures capable of being invaders can do so regardless of age - as such, you may be attacked by a werebeast child, or a young roc, giant, cyclops, ettin or minotaur. They will behave exactly like their adult counterparts, but will generally be easier to kill than adults due to their smaller size. Such cases are rare, as they require either children being infected by a werebeast and not dying in the process, or for megabeasts to breed, both being particularly uncommon occurrences.