Elephants are massive creatures who inhabit tropical shrublands and forests and the largest terrestrial mundane animals in the game. In past versions of the game, elephants were famed as cold, emotionless, and highly effective dwarf killing machines, blood eternally dripping from their ivory tusks, the bane of even the mightiest of fortresses, so on and so forth. (Size used to be correlated with combat bonuses, both to damage and damage resistance, making them incredibly dangerous animals; today it just translates into more and thicker tissues.) Nonetheless, their sheer size means that they still pack a wallop, sufficient to rip apart even the most well-armored of goblins with ease.

In the wild, elephants appear in clusters of three to seven individuals, and their size notwithstanding can be caught by the same cage traps as any other creature. Additionally, elven caravans may occasionally bring tame elephants with them, if they have settlements in the right locations - the method by which a 1,000 pound donkey carries a 15,000 pound elephant in a cage, on top of whatever else it's carrying, is a deeply veiled elven secret. Trained elephants can be turned further into war and hunting roles (no word yet on how elephant sneaking works, exactly), and are easily the most effective war animals that your fortress can train. In the future, it is planned that they will graze upon trees for food, but for now they eat grass and cave moss like all other grazing animals.

If you plan on breeding elephants, note that elephant calves take 10 years to mature (though they reach full size in only 5 years). Pregnant elephants will give birth to 1-3 calves, and they have longer lives than most animals (50-70 years) as well. Even in death, elephants are wonderful creatures; once butchered, their products are worth five times as much as those of more boring animals (like cows), and their great size means that there will be a lot of products.

Some dwarves like elephants for their strength, their amazing trunks, their calves' spirited antics, their tusks, their great weight, their social behavior, their flappy ears, their uprooting of trees, their aggressive sparring, their trumpeting, their tool use and their self-awareness. They have, by far, the most reasons to be liked by dwarves of all creatures in the game. 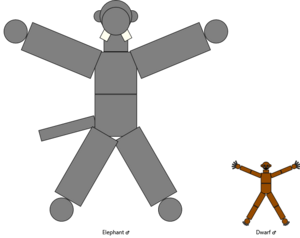