Trolls are large, predatory, dangerous subterranean evil creatures who inhabit all layers of the caverns and often appear under the command of goblins during sieges, and have any number of features which make them creatures to be taken seriously. Over four times larger than a dwarf, they are building destroyers, and will path to your buildings simply for the joy of sheer destruction. During sieges, they act as battering rams, so design your defenses accordingly. They are not related to night trolls, despite the similar names.

Wild trolls meander the underground and attack dwarves who approach or provoke them (or at least are supposed to, but currently don't Bug:10031). Many of them are enslaved/absorbed by goblins during world generation and become their servants, inhabiting their dark pits in truly huge numbers (sometimes enough to cause overwhelming lag Bug:7526) and aiding their smaller masters in their battles against other races. Goblins shear trolls for their fur, making them the evil race's equivalent of sheep. As they are intelligent (although incapable of speech), civilized trolls may gain non-military professions among goblin society. In a modded game, they may be usable in the dwarven textile industry, but you can't change their labors, due to a bug.

Trolls will almost certainly appear accompanying goblins when they siege your fortress. They are quite tough and have a variety of different ways to cause injury to your dwarves due to their humanoid bodies and large tusks. Since they only rarely wear armor (when appearing as helpers of Goblin Claus), they will be easy targets for a decently-skilled squad of axedwarves, though silk-wearing trolls can complicate things, if copper and silver are the only weapons-grade metals your fortress has available. Trolls can and will wrestle your dwarves, which can lead to some broken bones in your military. Unlike goblins, trolls are natural swimmers, which could be a problem for a fortress relying on a moat for defense, or using a drowning chamber or underground lake as a means of administering dwarven justice. Trolls can climb, so it is possible for them to get to level one of a cavern through deep pits and access your fortress to crush the heads of play with your dwarves.

Trolls notably possess cyan-colored blood (possibly hemocyanin-based). Their behavior as a servant race of goblins is done via the combination of the [EVIL] and [SLOW_LEARNER] creature tokens and the fact they live underground; through modding, players can create their own subterranean goblin servants who will accompany trolls in battle by giving their race these two tokens. Unlike gremlins, they cannot become pets of citizens. 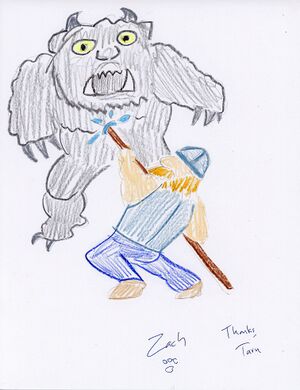 A dwarf battling a troll, drawn in crayon by Bay 12 Games.