Cinnabar is a brilliant red stone found as veins in numerous environments. Despite its appearance (showing up as £ unmined and * mined), it is not a usable ore.

Cinnabar is also the most dense non-economic stone besides slade, so it's very good for stone-fall traps and as catapult ammo. Hauling cinnabar is not realistic, or at least will take an eternity, without a wheelbarrow. Additionally, cinnabar crafts are so heavyweight that they can fill up a caravan.

Cinnabar is a mineral of mercury sulfide (HgS), and has been used throughout history both for the ease in which it can be made to release its elemental mercury, and for use as a red pigment in paint. In ancient Roman history, slaves or prisoners were consigned to cinnabar mines as a death sentence – unlike humans, dwarves are evidently immune to mercury poisoning. 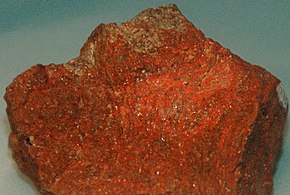