Saltpeter is a non-economic and low-value yellow stone found within sedimentary layers. With a melting point of 10601 °U and a boiling point of only 10720 °U , it is one of the few stones which will boil in magma. Saltpeter is also the second least dense non-economic stone, second to jet, making it great for objects that must be hauled frequently, if it were not for its rarity.

In real life, its best known use is as a primary ingredient of gunpowder, along with charcoal and sulfur. This process does not exist in Dwarf Fortress (yet; it seems Toady has plans to include gunpowder later, but only for simple uses), and therefore gunpowder is also non-existent. Saltpeter, as a source of both potassium (like potash) and nitrogen, is also a fertilizer, though it is not possible to use it as such in Dwarf Fortress. 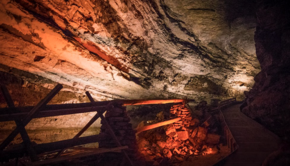 It is rumored that if a dwarf ever discovers saltpeter's capabilities, dwarven "civilization" would come to an explosive, but Fun end.

Despite persistent myths to the contrary, adding saltpeter to your male dwarves' military rations will not help to control your fortress's population or reduce incidences of romantic infidelity.