Native aluminum is the only ore of aluminum, a metal with the same value as platinum. It occurs in small clusters and is relatively rare.

Native aluminum is not strictly an "ore", but rather chunks of aluminum found in a naturally formed (native) metallic state. As aluminum is a very reactive metal, it's rarely found in such deposits, and the few natural deposits that do exist are found in strongly reducing environments. Most aluminum today is extracted from bauxite via a procedure called the Hall–Héroult process. Before the Hall-Héroult process, aluminum used to be rarer and more valuable than gold, despite being the most common metallic element in the earth's crust. Rumor has it Napoleon III had a treasured set of aluminum utensils for his most valuable guests, and the rest had to settle with plain gold. 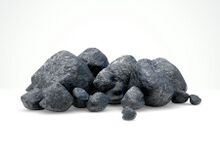