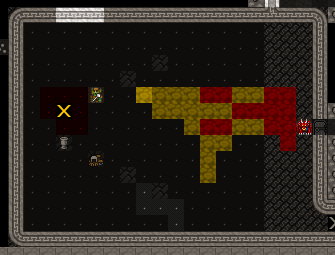 Legends claim that dragonfire can reach temperatures up to 50000 °U . At that temperature, almost all materials should be destroyed (the dragon's own body and its butchering products are exceptions). However, research has shown that dragonfire is quite particular about which objects it affects. When in a tile with dragonfire, organic materials will ignite, even including nether-cap wood with its fixed temperature. Non-flammable common stone, glass, and ceramic items will melt and boil away. In previous versions, such as v0.43.03 and earlier, metal objects and buildings were immune to dragonfire, even non-fire-safe metals like tin.Bug:6517 Dragonfire is similarly ineffective against water, producing no steam or evaporation. Buildings (but not constructions) are affected by dragonfire on their tile, making non-dragonfire-safe doors immune as long as they remain closed. Objects and buildings (and creatures) made out of slade are also immune to dragonfire, since the raws do not define a specific heat for slade.

Dragonfire is powerful enough to burn and kill creatures who are immune to conventional fire, like fire imps or magma crabs. The only creatures immune to dragonfire are dragons themselves, as well as their subterranean cave dragon cousins, despite the latter not being able to breathe dragonfire. All Hidden Fun Stuff creatures are also immune to it.

There are very few materials which can withstand the immense heat of dragonfire. Here is the full list: