Potash refers to a wide variety of potassium-bearing salts, first produced in roughly 500 CE. In modern times, they are used primarily in production of fertilizer, though they were once part of glass and soap production. While modern production methods have developed, this substance was once produced by soaking plant ash in a pot full of water, thus the name pot-ash, which in turn gives the name to the element potassium. 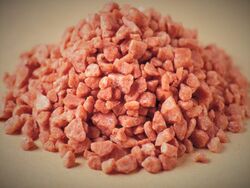