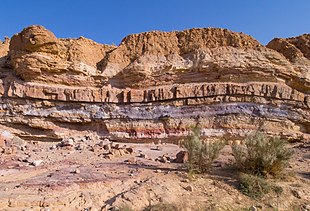 (* These also function as flux. **These are also magma-safe.)

Sedimentary layers are, on average, the most economically valuable of the four stone layers. They are your only source of bituminous coal and lignite, vital for fueling non-magma forges and for the coke that steel-making requires (especially if you lack trees). They are much richer in iron ores than other rock formations. Several sedimentary rocks - dolomite, chalk, and limestone - are fluxes, required for steel-making and also being twice as valuable as normal stone, making them useful for trade goods or furniture.

Sedimentary layers can be tricky to locate. If you are starting off, and you want access to an embark area with sedimentary layers, use the "Find Desirable Location" function before embark and set your parameters to include sites with flux stone. Since most flux stones are found in sedimentary layers, this will increase your chances that a suitable site will have sedimentary rock near the surface. Be careful when using the "Find Desirable Location" function, as it will sometimes list green sites that have flux stone but not indicate that it does, actually, have flux stone. To find iron ores, search for a location that has shallow metals, flux stone, medium elevation, and either high or low drainage. On large maps, the ore is sometimes located near mountains and major rivers in large (min ~10x10) chunks.

Alternatively, a mountain biome that has an aquifer is guaranteed to be sedimentary as well, due to mountains lacking soil, which means the aquifer must be in sedimentary layers.

If your embark civilization has access to sedimentary layer stones when preparing, it is likely one or more of the biomes in their sites overlap a biome containing it.

(In real-world geology, sedimentary stone is formed by sediment. The sediment gets carried away by rivers and deposited in constantly growing heaps, where the pressure at the bottom eventually forms the sediment into stone.)