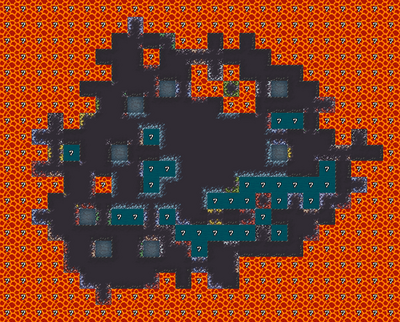 A cross section of a typical adamantine spire you will need to mine through in order to reach the underworld. Beware that the single empty tiles are likely to contain fun surprises!

A portion of the Underworld. The large pink & black areas are eerie glowing pits, which go all the way to the lowest z-level in the map. Demons can be seen wandering through it.

The Underworld takes the form of a massive open cavern of slade, dotted with giant, bottomless eerie glowing pits (*) which will instantly kill anything that falls into them (unless floors are constructed over them). It is inhabited by demons who, when first encountered, will immediately rush to the nearest exit they can find, typically leading to overwhelming amounts of fun. The initial demon invasion may reach well over a hundred attackers, sometimes leading to FPS death before they even reach the fortress itself.

Demons spawn on the edges of the Underworld much like animals do on the surface; demons thus spawned will be content to meander, without going out of their way to extinguish all life they can reach. It is yet unclear whether the number of demons is finite; in information exported from the legends screen, the population of demonic species is listed as "unnumbered", a descriptor usually reserved for ants, worms, and other omnipresent vermin. Clusters of webs can be found scattered across the Underworld's surface, marking the presence of demons able to spew webs as a form of combat. In worlds generated without demons, the Underworld is empty and goblins are not present either, but goblins can still appear through historical deep dig disasters.

When digging through the adamantine spire, there is a mixture of 7/7 squares of magma and water, obsidian, high-quality gems, and raw adamantine. Intermingled with this are single-tile empty squares, which can contain four different types of things: 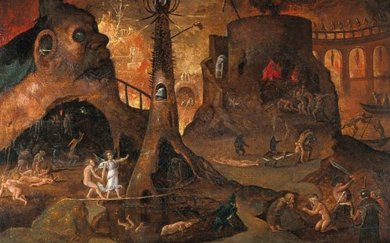 For training purposes, the Underworld is a perfect place for a Dwarven Boot Camp. Even if a soldier dies in the battle for hell, you can track down their sorry dwarven butts, and drag them out of the eerie glowing pit... And right back to boot camp! Side effects of Underworld Boot Camp include: Mental trauma; repeated cases of death; losing the will to live; fun.