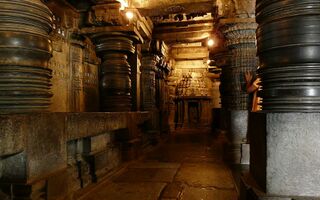 A temple is a structure devoted to an object of worship, which, typically, is any sphere-aligned being, such as a deity, megabeast, or titan.

In fortress mode, temples are locations (l) that can be created from any zones. Temples can be dedicated either to any deity worshipped by at least one of your dwarves (not necessarily from the world's dwarven pantheon), or to "no particular deity", making it a place for anyone to meditate or to worship whomever they want. Dwarves who worship foreign gods--which is to say, gods who originate in civilizations outside of your own--need specific temples while worshipers of local gods will be satisfied by a temple dedicated to no particular deity.

A temple can be dedicated from any meeting area. Temples require instruments for their music and, thus require containers to store them. However, a temple created with no instruments will still be used by citizens and visitors. Temples also require an empty floor space (called dance floor) with a minimum surface of 25 tiles[Verify], the same as taverns. Performers can also be assigned to temples to perform sacred dances. Beyond being religious activity, dances and poetry in temples fulfill the same functions as they do in taverns, with the caveat of being limited to followers of said faith.

Being able to commune with their deity or meditate gives a serious enraptured stress decrease to the dwarves. Not having a designated place to pray, on the other hand, makes them sad or distracted. Thus, making a temple early on might be a good investment for your fortress, even more so if you're going through difficult times. Simply designating any zone as a place to pray is enough to initially satisfy most of your dwarves; you do not need to provide instruments or containers for your dwarves to pray.

You may dedicate a temple to a specific deity. This leads to a greater mood boost for those who worship that deity, and it is required for prayer to any deities originating from outside your civilization.

When one of your fortress's religious organisations (sects) has sufficient (10 by default) members, they may petition for the creation of a temple specific to their faith. Once established, these worshipers may congregate at the new temple, though it does not stop them from using other temples to no particular deity; the temple dedicated to their deity existing at all is sufficient to please them. If the petition is ignored for too long, it is eventually abandoned, and the petitioners will receive unhappy thoughts. The petition is satisfied when the temple has a minimum value of 2000 and when priesthood is recognised. A temple with a value lower than 2000 is called a shrine, but with a value of 10000 or higher, it becomes a temple complex, which is needed to recognise high priesthood.

If you find yourself struggling to get your shrine up to temple status, or to go from temple to temple complex, there are two tried-and-true methods for increasing wealth:

Made at either a carpenter, metalsmith or stone worker's shop, a pedestal is capable of holding objects for display. Once filled, it can increase a room's value significantly. Gems, artifacts, or other high-value items are a great choice here.

Being more valuable than basic rock flooring, metal floors can offer incredible wealth gains for your dwarves' place of worship. With fine metal flooring (ex. gold, steel) and a skilled engraver, you can create a lot of wealth relatively quickly.

REMINDER: If a group of dwarves file a petition for a deity-specific temple, it's a good idea to write down the petitioners' request for the specific deity and/or religious sect, as it's often not accessible from the UI after you accept the petition. Although, if you have DFHack, you can use the command list-agreements to find it. Once a location is designated you can verify the current value & level as well as the agreed on level via the locations (l) menu and selecting to the location.

Pilgrims will visit fortresses specifically to hang out in temples. Other visitors may pass by the temple and socialize with the dwarves there, if they came to visit a tavern or library.

As in adventure mode, worshipers of the temple's deity that topple a statue (or anything else that's been built) in a temple will be cursed as a vampire or werebeast [1][2].

World-generated temples are visitable in adventurer mode. They are located in human towns and goblin fortresses, with smaller temples in monasteries and forts, and are build when a given religion has enough followers in said site, or the site is dedicated to the religion. Priests can be found in temples, and will allow you to join the local sect of their religion with the conversation topic 'Service'. In the current version, it is not possible to join a temple.

On first joining a sect dedicated to a particular object of worship, that entity will be added to the character's record. An adventurer can then converse (k) anywhere with any deific object of worship. Though the deity's only response is silence, repeated conversations can change the deity's 'object of worship' status from 'dubious' to 'casual', 'object', 'devoted' and 'ardent'. It's unknown whether conversing with other objects of worship can increase their worship status; megabeasts tend to be uniformly hostile, though titans may be flagged 'benign'[Verify].

Temples can have basements, sometimes extensive catacombs, which may be crawling with enemies. These range from the typical kobolds and goblins, to the occasional lurking mummy (with assorted skeletal minions). Pedestals will be found in these lower levels, and will sometimes contain holy artifacts.

You can defile a temple of your deity by toppling a statue, which leads to being cursed by the patron deity with either vampirism or becoming a werebeast. For this, the temple must be actively used (i.e. not an old ruin). 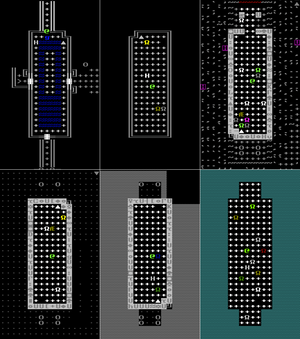 Before a temple is built in a site, there will be shrines dedicated to a given religion, consisting of a small garden, a statue, and either a pedestal or an altar. If the religion has a divination tradition, divination dice can be found in these shrines. (Not to be confused with the lairs of titans, also called shrines.)

A selection of shrines in a town in adventure mode, from left to right: a shrine in a townplot, a shrine with a garden, a statue at crossroads and a shrine with dice.

Occasionally during worldgen, a site government may choose to raze an old temple, and build a new one in its stead. The ruins of the old temple, as well as any catacombs it was connected to, will still be explorable in adventure mode. Interestingly, the construction of the new temple will always coincide with the formation of a new religious order to utilize it - the order belonging to the old temple will remain on the site, but will move their offices to the keep. Due to this, leaders of "archaic" orders are often found in the keep.