In the case of monastic orders, the head will be an Abbot, and the followers will try to build a monastery, which they will first seek sponsorship for from other groups, such as site governments or craftguilds. Those monastic orders will occasionally recruit monks from sites to increase their population.

With non-monastic religions, as the amount of followers increases in a site, they will have a shrine dedicated to their religion, as well as a local priest. Priests will convert more of the population to their religion. Eventually, in towns, temples will be built and a high priest will be selected. Once two temples in different cities have been built, a Holy city is selected from the existing temple towns and the highest priest is selected. These positions will typically have an utterly bizarre title (such as "great orange") that comes from the sphere which their deity is aligned with. Within adventure mode, they will also greet you in the strangest way ("Life is, in a word, death."). 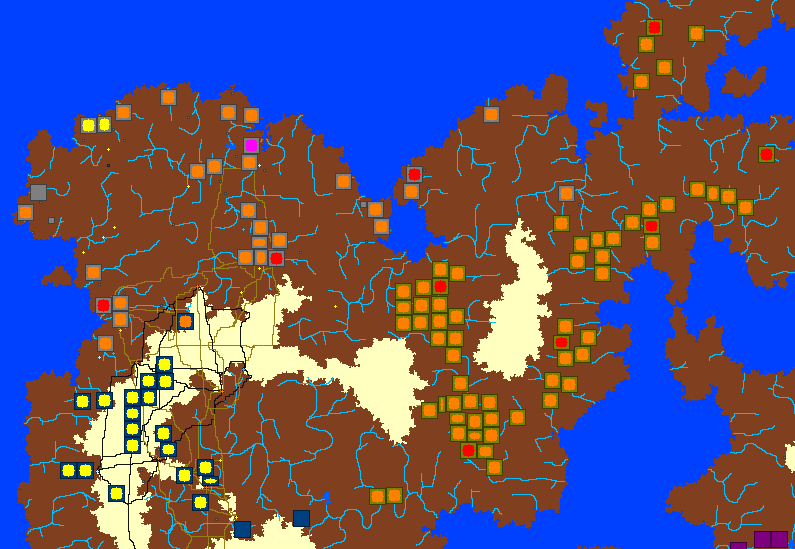 Each of your dwarven inhabitants has some, or several objects of worship: these include deities, but also megabeasts. In the case of deities, there are five different levels of worship, in decreasing order: "ardent", "faithful", no label, "casual", and "dubious". Regardless, any deity-worshipping dwarf will sometimes have a need to commune with their deity at a temple, and will do so when they have free time. Praying evokes a very strong and positive enraptured emotion, so the effects of temples on your citizens' well-being should not be underestimated. Dwarves that are unable to pray may feel distracted and receive unhappy thoughts. The exact inner workings are unclear, but the importance of such effects presumably depends on the strength of the need and the level of worship. There are many religions, and your dwarves' religious needs don't overlap that much, so you may need to designate several temples to satisfy your whole population.

As your fort gains new residents from different civilizations, whether they petitioned for citizenships or were rescued from another site by a squad sent on a mission, the list of available religions may increase. As detailed on the temple page, as enough followers of a given religion join your fort, you will be petitioned for a temple and asked to select a priest. Priests are able to console upset dwarves the same way mayors do, and may give inspiring sermons.

Important religious figures from the player civilization can migrate to other civilizations, presumably to do missionary work. During wartime, these holy people will not only coexist peacefully with hostile civilization members but will also take part in defense when the site is attacked. When these people are killed during a raid, the notification is colored the same as when a squad member is killed, probably because they are still members of the player civilization. There are no ill effects from killing members of your own civilization during raiding missions.

A position in church hierarchy in these cases is hereditary; it can pass to a descendant in a player fortress. This heredity is instantaneous and will ignore any religious affiliations; for instance; a total atheist who doesn't belong to any church can inherit the position of "the abbot of The Bronze Communion" the exact moment his father dies during a raid in a faraway forest retreat.