A flail is a blunt weapon that consists of a rounded weight attached to a handle by a length of chain. Flails are the same size as a morningstar, but have a contact area twice as large as a much larger maul. Against soft targets, their large surface area, deep penetration and high velocity modifiers allow them to pulp body parts more easily than many other blunt weapons.

Flails use and train the macedwarf skill. As foreign weapons, dwarves cannot forge flails, limiting supply to whatever low-quality specimens can be traded from human caravans and scavenged from invaders. Almost all dwarves can equip flails, though some must use two hands. 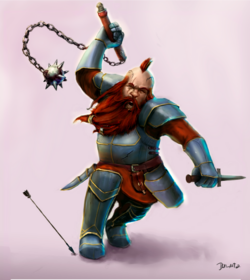 Has accidentally hit himself with that thing more than the enemy.
Art by Dan1004
Retrieved from "https://dwarffortresswiki.org/index.php?title=Flail&oldid=276891"
Categories:
Hidden category: