A scourge is an edge weapon that consists of a spike or bladed weight on the end of a flexible length of material that can be swung at high speed. Scourges have low contact area and high velocity, making them effective even against armored opponents, shredding armor, flesh and bone. Scourges are similar to whips, though the whip is a blunt weapon with an even smaller contact area.

Scourges use and train the lasher skill. As foreign weapons, dwarves cannot forge scourges, limiting supply to whatever low-quality specimens can be scavenged from goblin invaders. Even the smallest dwarves can equip a scourge one-handed. 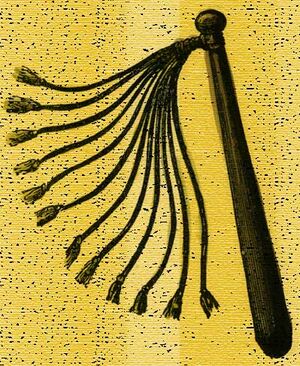 Though typical goblin scourge has 1 hitting part instead of human's dozen, it's still better than a sword.
Retrieved from "https://dwarffortresswiki.org/index.php?title=Scourge&oldid=278079"
Categories:
Hidden category: