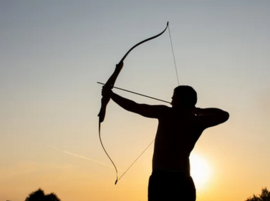 The best use for ammo: hurting others. 🏹

Ammunition is the collective term for projectiles that can be fired from ranged weapons such as crossbows and blowguns. Ammunition is stored in ammunition stockpiles and carried in quivers. Ammunition may also refer to the stones and Ballista arrow fired from siege engines; for more information about these weapons, see the siege engine article.

Ammunition for foreign weapons like bows and blowguns is also considered foreign, and cannot be manufactured in the fortress.

All ammunition has "EDGE" attack types; this means that sharper metal or other sharp materials are better for ammunition purposes. As projectiles, however, ammunition is also affected by the density of the material and the volume of the individual arrow, bolt, or dart.

When dwarves with bolts or arrows stuck in their bodies are treated in a hospital, the removed ammunition will be left in their beds.

There are three types of ammunition in Dwarf Fortress: bolts, arrows, and blowdarts, each fired from a different weapon.

In practice, almost all metal bolts perform well, though there is some advantage in using a bolt of a "better" weapon material than the opponent's armor (quicker lethality), and some advantage in using a bolt with a higher density (faster incapacitation). The forum thread Dwarven Research: A Comparison Study on the Effectiveness of Bolts vs Armors has a comprehensive comparison and discussion.

Projectiles are more likely to be blocked than parried.[1]

Blowgun darts are noticeably less effective than bolts or arrows. This is due to them having a light weight and a small size compared to other ammo types. They almost never manage to pierce armor and are stopped even by clothing, unless the darts are made of metal.

Subterranean animal tribes, the main users of blowguns, do not have access to metal, so you will never see non-wooden blowdarts normally.