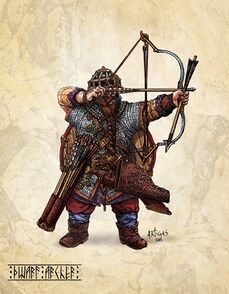 In order to engage in archery, a dwarf needs five things: a ranged weapon; a quiver and ammunition; proper labor/military assignments; and a target. For further information, see the archery target page.

Dwarves will fire at targets 25 tiles away and are able to engage targets that are up to 3 z-levels up or down without any loss in firing distance.[Verify]

Assignment of ranged weapons is done through the military equipment screen (m-e). If you only have a few ranged weapons, military squads get first pick, and then hunters can choose from the leftovers. Squads can be assigned a particular type of weapon, but hunters cannot be controlled so finely.

Assignment of ammunition is done through the military ammunition screen (m-f) for both military squads and hunters. Ammunition must match the weapon: bolts for crossbows, arrows for bows.

A living target can be selected from the squad menu by selecting the squad(s) you wish to have attack and then selecting the attack target. You can then select a single target with the cursor, a number of targets by enabling selection by rectangle, or selecting a number of targets through a list. Note that if your dwarves don't have the required ammunition, quiver, or bow/blowgun/crossbow, the squad members missing these components will attempt to engage the target in melee. There is no way to force dwarves to only attack from range, but adequately equipped dwarves stand the best chance of remaining at range.

Higher skills in the bowman, crossbowman, or blowgunner attribute equates with greater accuracy and higher rates of fire. In order to increase the crossbowman/blowgunner/bowman skill, a dwarf must fire at something; if it misses a target, it will gain the same amount of experience points just as if it had been hit.

Dwarves using archery have their place in the military: They may fire at a distance without the threat of being attacked by melee weapons or by being mauled to death. They can fire through allies without hitting them, allowing them to support friendly warriors from behind. They may fire from higher or lower Z-levels than the target intended. Archery targets must be engaged from the same Z-level and with no empty spaces in between the ranger and target. They may fire at enemy targets through fortifications and over empty spaces although their usefulness is thwarted by proper armor and tactics.

Archers will use their bows, or other ranged weapons, as melee weapons if they run out of ammunition, although regardless of having ammunition or not, they will prefer to run towards the enemy anyway. Crossbow melee uses the hammerman skill while bows and blowguns use the swordsman skill.