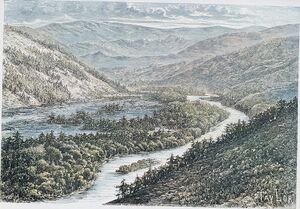 River flowing into the hills

A River is a body of water flowing from the mountain springs towards an ocean or a lake. Rivers serve as a terrain feature and gameplay element.​ Rivers come in a variety of sizes and types. Larger ones will impede movement and may serve as natural defensive boundary, while brooks, being the smallest type of river, can be crossed safely without needing to swim, risk of drowning, or even getting one's feet wet. In hilly terrain, particularly with cliffs, waterfalls can be found. Rivers can be the lifeblood of a fortress, potentially providing a renewable source of water and wildlife for fishing, hunting or danger when traveling near them. They can also freeze.

There are five different kinds of surface rivers: major rivers, rivers, minor rivers, streams and brooks. For most purposes, each kind will simply be referred to as rivers or brooks. The only differences between the first four types are their appearance on the world map, their width, and possibly their rate of flow.

Rivers are represented by dark blue ≈ and ~ water tiles stretching from one edge of the map to another, with banks bounded by downward slopes ▼, or ▒ when frozen. Rivers come in a variety of sizes, from tiny brooks only three or four tiles wide, to major rivers spanning as wide as 40 tiles. If flow amounts are turned off in d_init.txt, river tiles will also be constantly blinking to indicate that the water has flow. Rivers are an effectively unlimited source of water, entering the map at the upstream end and leaving at the downstream end.

To determine which end of a river is downstream, you can carefully look at the ends of the river using k. The end that has multiple tiles of less than 7/7 water is the downstream end. (This strategy doesn't always work on freshly-generated maps, as the river can still be completely full of water.) Flow amounts can be enabled in d_init.txt, which eliminates the need to use k but also removes flow indicators. A dwarfier method would be to kill something, get its blood in the river, and observe the direction of the blood's movement.

Dwarves will not swim across rivers in fortress mode, regardless of their swimming skill, and unskilled dwarves that end up in a river can quickly drown in the current. Dwarves will only seek dry routes across rivers, such as a bridge, floor, or tunnel.

As a biome, there are six types of rivers, divided by climate and the salinity of the water (see table below). The biome greatly affects the creatures of the water and surrounding land. Additionally, rivers are more prone to having an aquifer close to the surface, and most riverbeds are made of layers of clay or sand.

Brooks are the smallest type of river. They have a unique property that allows creatures (including wagons) to travel across them without swimming, or even getting wet. Water and other fluids can fall through the surface of a brook, and fisherdwarves can stand on the surface of a brook to fish. Otherwise, brooks function like any other river.

Appearance on the regional map[edit] 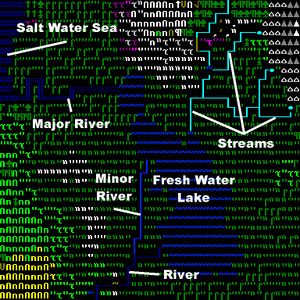 On the regional map, there are five different classifications of rivers, identified by their appearance and the text displayed at the right side of the screen when they are selected in the local map view (major rivers, rivers, minor rivers, streams and brooks). Representing the connectivity hierarchy of how the river from small headwater brooks up to large river mouth emptying into the ocean. Brooks are not directly visible on the regional or world maps, but can still be seen in the local map and will also be indicated at the right if you select a tile containing a brook.