A small, pale arthropod found in underground streams and ponds. 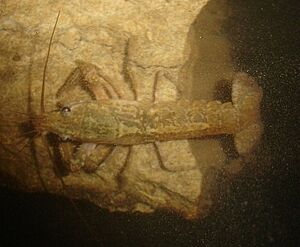 Admired for its beauty.

Cave lobsters are a type of vermin fish. They are found only in underground bodies of water. Cave lobsters cannot actually be caught by fishing - instead, they must be caught in baited animal traps. Upon processing the cave lobster produces an edible cave lobster and a shell that cannot be used to craft items, unlike other shells.