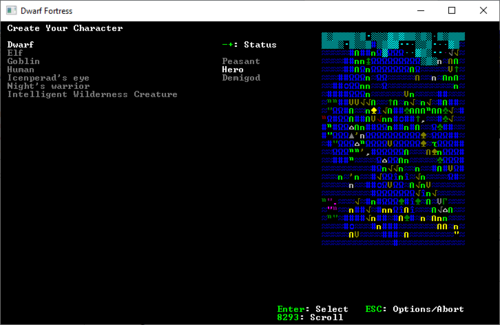 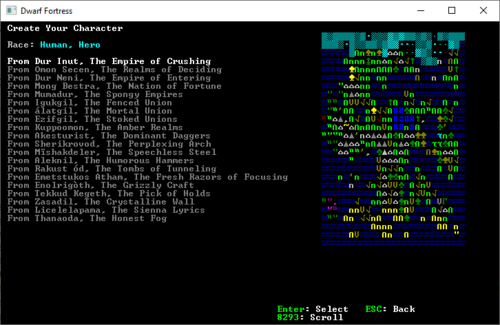 Outsiders are adventurers that aren't from a civilization - they can begin at any site and are strangers to all. Only humans can currently be outsiders in vanilla by default. Other races can be played as outsiders if [OUTSIDER_CONTROLLABLE] is added to the creature's raws. At least one [ALL_MAIN_POPS_CONTROLLABLE] civilization must have existed in the world in order to play as an outsider, though the civilization does not need to be alive. A human (or in this case, dwarven) civilization is not strictly required.

Outsiders will always try to begin in a populated site. Caves, and even lairs with megabeasts will be chosen, when there are no occupied civ sites. When starting from a lair, be sure to escape from the site immediately, as soon as the game starts, to avoid an instant death.

Playing as an outsider has many initial limitations. They possess no pre-existing relationships or knowledge of various events and wildlife. When selecting skills for outsiders during creation, many more skills may be available than would otherwise be available if they were part of a civilization. Because they lack a cultural identity, outsiders cannot worship deities and are unable to perform dance, music, or poetry due to having no held art forms.

Determines the number of starting skill, attribute points, and equipment points which do not change based on race:

You can choose the town you start at, your occupation (affects skills) and religious beliefs, if any.

This decides where you start the game at, and what local government you initially belong to. Generally this is not very important, as you can always make your way to "better" sites later, but there are advantages and disadvatages to certain site types. For example, mountain halls and fortresses can prove difficult to get out of, so they are not recommended to the new player.

The available site types depend on civilization type (e.g. dwarven, human or elven), but, all in all, there are: hamlet, town, castle, fort, hillock, fortress, mountain halls, forest retreat, camp.

This also affects your "childhood friends", what people your adventurers already know by the start of the game. If you start in an important (well-populated) site, your friends may very well encompass royalty or semi-important priests.

The occupation selection might seem glamorous and all, but truly, most of the occupations are presently only there for flavor - they do grant skills, but most of these are not currently usable in adventurer mode.

Notable occupations are hearthperson, fortress guard and soldier which grant you a position as the vassal of a local noble (lord/lady, captain of the guard or mercenary/bandit leader) instead of any skills. The Hunter occupation also has several skills usable in adventurer mode.

The level of skill granted is dependent on your adventurer status (peasant, hero, or demigod), with the greater getting more skill levels. For this reason, the list below doesn't include any set skill levels, instead using the terms "Low-level", "Mid-level" and "High-level". To see what those correspond to, see the table below.

This decides what deity or religion you put your faith in. You may also be atheist/have no faith, and sometimes this is the only option given to you. With wq you control how ardent your faith is. 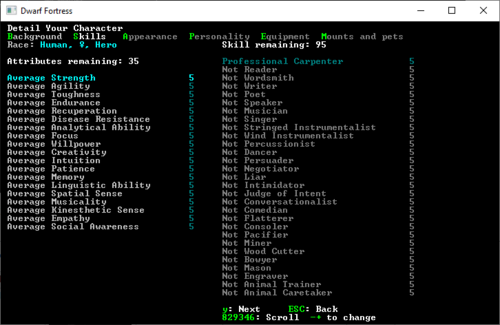 Attributes are divided into Body and Soul attributes. This section provides some guidance for allocating attributes as it relates to adventurer mode.

Some of these are demonstrably useful for adventure-mode-applicable skills, but the effects of the attributes aren't clearly understood. For ideas on how they may be applied, see a list of skills organized by attributes..

Adventure mode attributes are capped at double starting value, or starting value plus the racial average, whichever is greater. Humans, for example, have a racial average strength of 1,000. If a human adventurer started with an above average strength of 1,100, then their strength would ultimately be capped at 2,200. Had this human started with a below average strength of 900, then their strength would be capped at 1,900 instead. For the purpose of maximizing final attributes, this makes it important to start with as many attributes in the superior range as possible (more attributes per point allocated), while avoiding taking any penalties to even remotely-important attributes (big attribute deductions per point recovered). As a consequence of the attribute cap, demigod adventurers will always have a much higher potential for advancement than mere peasants and heroes (unless you become a night creature, that is).

This section will specifically address starting skills as they relate to adventure mode. For a full description of combat skills see Combat skill. Other skills that you can't start with, but which can be increased in-game (such as Butchery) are described elsewhere.

Since version 0.47, weapons may be chosen on the embark screen before starting an adventure. The weapons available to a given adventure are decided in their civilization's entity raws: humans will be able to start with a whip, while the same will not be available to a dwarf, and so on. Outsiders will have a wide array of weapons to choose from, some of which may be made of non-weapon grade material.

Not all races/civilizations can start with all of these skills - Dwarves can't start with Bowman, Pikeman, or Lasher. Elves can only use Swordsman, Bowman, and Spearman. Of the playable races, only humans have access to Pikeman and Lasher. Strangely, only outsiders can start with Knife User.

Note that different races have different names for their weapon skills. Axegoblin, Axedwarf etc. These names are defined in the creature raws, as can be seen in the dwarf raws, but Crossbowman is an exception - dwarves call this skill Marksdwarf, although bow skill is referred to as Bowdwarf, as you'd expect. Elite Axe and Hammerdwarves are referred to as Lords.

These skills form the basis for combat effectiveness. There is no maximum value to their utility, so if you begin with a rank equal or higher to your chosen weapon you'll become better able to benefit from other weapons when necessity or strategic advantage requires. Starting versatility can pay off early; you may choose your starting weapon, but the best available weapon is beyond your control or prediction.

These skills are critical for survival. Starting out with good ability in one (especially Shield User or Armor User) if not all is strongly advised.

While some of them come in handy at times, they can generally be raised fairly easily in-game, especially Wrestler and Thrower.

These allow your character to create things:

Almost all of these are only used in arguments.

These are your general performance skills, similar to fighter skill, in that they enhance rolls for many different skills and can be leveled easily. 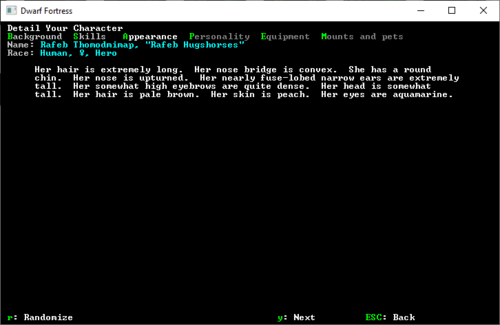 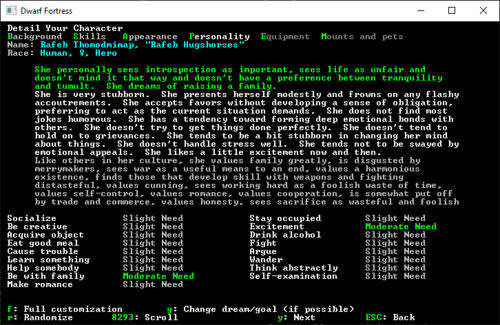 Skills that affect your character's ability to pull off performances. These skills can be used to play as a bard.

Note: if your civilization does not have access to a type of instrument, you will not be able to choose that skill at character generation time.

There are also procedural skills for every different kind of instrument, dance and poetic form, these will vary from world to world and by civilization, and cannot be chosen at character generation, but can be leveled in play.

You are able to customise your adventurer's appearance, needs and preferences. Just like with any citizen in fortress mode, their needs will have to be fulfilled, or else the character suffers from distraction. Appearance does not seem to affect anythingVerify

As needs are fulfilled, your character's total level of focus goes up, gaining you bonuses to accuracy and other skill rolls. Your current level of focus will be displayed while playing, as one of the following: Focused Focused!

In the current version, some of these are unable to be fulfilled in adventurer mode. 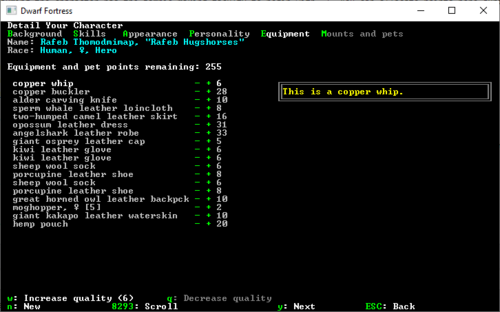 You can choose the weapons, (if any, given wrestling skill) armor and pets you start with. The menu is similar to fortress mode, but the amount of starting points depends on your status:

Items and pets share the same pool of points.