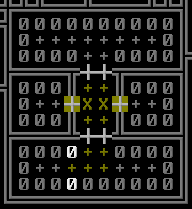 Burial receptacles are containers for deceased dwarves and pets that are used to store their corpses, and other remains. Somewhat confusingly, they have different names depending on the materials used to craft them, but, thankfully, they all function identically, and all are placed with the Burial Receptacle (n) option via the build menu. This article uses the term "coffin" to describe any burial receptacle, for reasons of brevity.