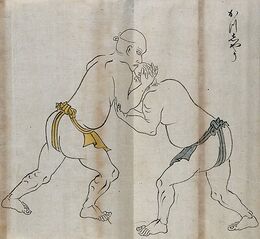 An ancient drawing of sumo wrestling.

The wrestler combat skill pertains to incapacitating enemies by grabbing hold of limbs and other body parts, which is distinct from striker, kicker, and biter; separate skills that pertain to punching/scratching, kicking, and biting attacks, respectively. Note that the thrower skill is used for throwing miscellaneous objects at creatures, not throwing the opponents themselves. A wrestler who has gained Legendary level of skill is called an elite wrestler.

While striking and kicking are basic one-shot attacks like weapon attacks, biting can be used in conjunction with wrestling, even though it uses a different skill to determine if the bite "hits" (see Biting and Ripping Off Body Parts below).

When wrestling, the advantage always goes to the creature with greater mass. A stronger wrestler's moves will fail against larger opponents, and they will be unable to break holds. Blood loss will cause a proportionate reduction in a creature's mass, so a sufficiently injured minotaur can become vulnerable to a dwarven wrestler. Wrestling skill also improves defense against wrestling moves, so even a relatively light creature can benefit from developing it.

While the same wrestling "moves" described here can be used by dwarves in fortress mode, it isn't possible to force particular wrestling maneuvers to be used. About all you can do is take away a dwarf's weapons to encourage wrestling, and hope that they pick effective wrestling tactics in combat.

In fortress mode, wrestlers are generally unable to kill very effectively, but they may make killing easier for their armed comrades. Unfortunately, the AI is rather unlikely to do some of the more elaborate moves, even if they are possible.

Wrestling in adventurer mode can be performed by standing next to an enemy and pressing A, selecting (and perhaps confirming) the enemy you wish to fight, and then b to select a wrestling move. You can wrestle any enemy, but the effectiveness of your wrestling attempts will be limited by relative size and strength differences (for example, a dwarf is unlikely to be able to throw or choke-hold an elephant or dragon). Unconsciousness renders a creature vulnerable to wrestling regardless of size differences.

Wrestling works somewhat like a targeted attack. Once you grab a creature by some body part, you may be able to make another wrestling attempt that will allow you to perform a more elaborate and useful move. You may have to press , once or twice before you can do a second wrestling maneuver.

Below are instructions on how to perform various wrestling moves in adventure mode:

(In many of the moves that require two steps, auto-attacking after the first step will default to the secondary action. For example, after biting someone and "latching on firmly," moving into your opponent(auto-attacking) will cause you to shake the part with your teeth. This can be useful to quickly remove your lodged weapon or choke your opponent without manually performing each attack.)

See status icon for a legend of icons used when creatures are prone, thrown, stunned, etc.

This knocks an opponent to the ground, similar to how they fall to the ground when charged, though without stunning them. Once on the ground, they'll have to take time to stand back up, or their movement rate will be limited as they try to crawl. This move can only be performed if the opponent is standing up.

To perform a takedown:

You perform a throw the same way as a take-down, using the same procedure as above, except that you select Throw by x with y when the opponent is not on the ground. A throw will cause an opponent to become stunned and prone, with the possibility of throwing them back a certain distance (depending on your strength and relative size). However, it is more difficult to successfully throw a creature than it is to perform a take-down on one.

Chokeholds can be extremely effective, if you can pull them off. A chokehold will cause an opponent to become unconscious, making it extremely easy to kill them with a followup shot.

To perform a chokehold:

With some body parts, it's possible to put them into joint locks and break them. This works almost exactly like strangling:

Biting and ripping off body parts[edit]

When biting a creature, you will usually get a message saying You latch on firmly!. If you have latched on with a bite, you can enter the wrestling menu and shake the creature around with your teeth - this can be extremely effective.

To bite down on and attempt to rip off a body part with your teeth:

To pinch or gouge, you have to have at least one hand free, meaning that it can't be holding something like a weapon or shield.

Pinching can do anything from tissue damage to severing the body part.

If you know how a creature is attacking, you can try interrupting the attack with a grab. Incoming attacks are shown in the Aim attack menu, and the main attribute that determines how well you can see incoming attacks is the Observer skill. To interrupt an attack, you must have a hand free (Use q to strap any weapons you're holding to your upper body, if necessary).

Unlike interrupting an attack, you can attempt to disarm a creature at any time. As with interrupting, you must have a hand free (Use q to strap any weapons you're holding to your upper body, if necessary). Note that some powerful creatures may actually be more dangerous if you take away their weapon.