The butcher's shop is used to slaughter tame animals, or to butcher the corpses or skeletons of slain wild animals. A tame animal can be designated for slaughter in the u Creatures menu under the Pets/Livestock tab.

Slaughtering is instantaneous once the animal has been led to the butcher's shop. Pets cannot be slaughtered.

Wild animal corpses, body parts or skeletons can be butchered as long as they are sufficiently close to the butcher's shop, and sufficiently large to yield results. Butchering is not instanteous.

A butchered animal results into various items with different uses:

Renders a dead animal into its component parts of meat, fat, skin, bones, and skulls. Usually used on animals that your hunter brings back, or tame animals you chose for slaughter. The animal must be in a stockpile (anywhere) or lying on the ground within 20 tiles of the edge of the butcher's shop in the same z-level (i.e. a 43x43x1 box centered on the workshop).

Requires an animal trap and trapping. The trapper will take the trap and chase vermin until it catches one. This task is also available in the vermin catcher's shop.

Requires a caged fire snake, cave spider, or phantom spider and animal dissection. Contrary to the name of the task, the vermin must be alive (though it will be dead once the task is done). Produces liquid fire and venom, respectively.

One thing to beware of is that butchered creatures will practically explode into piles of meat, bones, fat, organs and more; this can quickly clutter up a butchers shop or risk rotting the entire pile if not enough haulers and a suitable stockpile are available. Refuse also can not be stored in containers, so every item will use up one stockpile tile. For any jobs, such as cooking meat, rendering fat, and carving bones, the entire stack will become tasked and unavailable to other workshops. 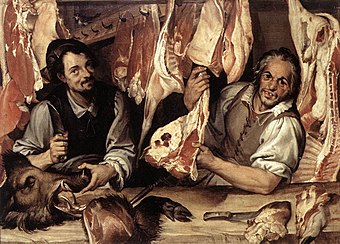