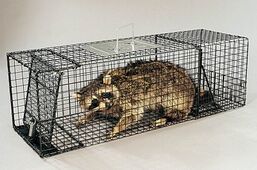 An animal trap is furniture used to catch live vermin. They are created at a carpenter's workshop with 1 log or a metalsmith's forge (in the Furniture menu) with 1 bar by a dwarf with the trapping labor enabled. An animal trap can be made from wood or metal. Animal traps are unrelated to other traps. To capture creature-sized animals, a cage is required.

Like cages, animal traps are stored in an animal stockpile. To set the pile to accept only empty traps, go to its settings and block all items, then j to enable empty animal traps.

To catch vermin on land, order the task "Capture a Live Land Animal" from a kennel or butcher's shop (q-a). A trapper will grab an available animal trap and begin to pursue and capture wild vermin. To catch vermin in water, order the task "Capture a Live Fish" from a fishery (q-f). A fisherdwarf will then take a trap and capture an aquatic vermin from a fishing zone (that has available fish to catch). You may want to put the task in high priority so that fisherdwarves will prioritize the task over regular fishing.

Animal traps can also be built on a tile by going to the build menu and pressing m. After the trap is placed, it must be baited with fish, meat, or a large gem (large gems are useless at the moment). Press q and hover over a placed trap to select its bait type. Press z to deselect the bait. When a bait is selected, trapper will automatically go and bait the trap (you cannot remove the bait afterwards). A baited animal trap flashes between the trap and bait symbols. When it successfully captures (or fails to capture) a vermin, the game will pause and make an announcement. A trap with caught vermin will automatically be slated for removal, and subsequently be hauled back to a stockpile.

Make sure to build the trap at an area with available vermin, otherwise the trap will be unable to capture anything. If the bait is left for too long, it will begin to rot, and the building must be removed to prevent miasma.

The main advantage of building an animal trap over using a kennel or butcher's shop is the ability to specify the location or biome. It also allows trappers to perform other tasks while the trap is set up. The disadvantage is that built traps require bait to function, and you cannot set baited traps underwater to capture aquatic vermin.

When a vermin is caught, the trap containing the vermin will be brought to an animal stockpile which accepts vermin of that type by a dwarf with the animal hauling labor enabled. A caught vermin is treated as if it were an item. Marking it for dumping will send it to a nearby garbage dump, and once dumped will disappear back to the wild. Caught vermin are viewable in the animal status screen. To tame one, go to a kennel and select t. A dwarf with animal training enabled will take a trap containing an untamed vermin to the kennel and train it with food. After taming it, a dwarf will haul the animal trap containing the now-tamed vermin back to an animal stockpile.

You can remove a vermin from the trap (thus freeing the trap for reuse) by assigning it to an installed cage. For hateable vermin, it is recommended to have an installed cage in a far away place to reduce the chance of passing dwarves getting unhappy thoughts.

Vermin with [GNAWER] can break free from wooden animal traps. This does not destroy the trap. The game pauses and makes an announcement whenever this happens; if it occurs too often, it is better off getting rid of wooden traps and replacing them with metal ones.

There is a chance that a baited animal trap may be robbed, and the trap will need to be rebaited by a trapper. The item quality affects the success chance of catching a vermin. To compare, a normal trap has a 50% chance of failing, while masterwork traps will never fail.