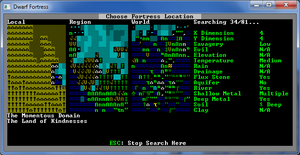 Heavy and varied aquifers may be extremely difficult to dig into as they constantly emit lots of water that can make mining difficult and potentially interrupt or even drown dwarves. This may limit the amount of stone and vertical depth you have to work with in the early game until you have a method of draining them. Light aquifers flood much more slowly, however, which makes it much easier to breach them and get through to the useful stones and ores beneath.

Aquifers of any type will need to be walled off to prevent flooding, which can be accomplished by either building or smoothing walls around damp stone. It is also possible to have areas that have no aquifers at all, which may be preferable for those who don't want to manage fluids in and around their fortress.

While searching your map for a good site, hit the Tab key to change the display. You will notice that there are several informative screens besides the default screen showing various properties of the area, including your Neighbors. A Neighbor is any Civilisation of a dominant race that would reasonably know about your new settlement and have diplomatic relations with the Civilisation you represent, which is selectable in the Your Civilisation tab.

Some Neighbors may be Towers, whose inhabitants are necromancers and the undead. You can be attacked at any time by undead armies if you embark near a Tower; those wanting for a slower experience may want to avoid these sites.

If any of your Neighbors appear with a red line, it indicates significant diplomatic hostilities between your Civilisation and theirs which most likely will lead into outright war. Open war will also be indicated in capitals. If any of these apply, especially for Goblin civilisations, expect a siege after your first winter. Sieges can be incredibly dangerous for young fortresses, but are entirely survivable with enough patience, and even defeatable with well-placed traps. Avoid overconfidence in your military, forbid and tightly close your doors, and hope the enemy dispel before your supplies of food, water, and raw materials run out.