A central tower, as seen in adventure mode in 47.01. Notice the two structures that are partially revealed on the sides? Those are barrows.
Image taken by Untrustedlife from the forum

Zombies can build up towers a bit to increase a site zombie cap. If the necromancer is at their zombie cap, they can still raise more zombies, but they are added to a 'wilderness population' instead. The wilderness population can still be used for invasions, but they are also able to roam in to player forts in the region and also encounter adventurers. Such regions become evil slowly, emanating outward visibly from the tower tile by tile. Necromancers can infiltrate site graves and catacombs to sneak out some zombies, before they are ready to attack (in the previous versions, they would only raid old battlefields.) Necromancers captured during such risky infiltrations are generally executed.

In adventurer mode, necromancers are most commonly found in towers, which generally have a few necromancers and a lot of undead. Becoming a necromancer yourself requires reading about the secrets of life and death, which are either found on a slab or in a book. If you decide to attack the tower, very high combat skills will be required to survive the zombie guards, and the necromancers themselves will be quick to reanimate any dead companions you happen to have brought. Alternatively, you can become a vampire either by drinking another vampire's blood or defiling a temple of your god, which will make the undead passive to your presence (since you're undead yourself now) and allow you to simply stroll your way into the place and even have a chat with the necromancers. Becoming a werebeast may help in fighting the zombies, but keep in mind that undead don't tolerate werebeasts like they do with vampires.

Towers consist of a central tower and, typically, one or more smaller structures called barrows.v0.47.01 The tower and barrows will contain corpses, necromancer experiments, traps, and the treasure that the necromancer(s) have collected throughout world generation.

"Tower" listed as a neighbor on the embark screen indicates the presence of a necromancer tower nearby (within 10 embark tiles on the region screen, making a 21x21 area of influence). The necromancer will regularly send undead to attack you, leading to immense amounts of fun should you not be properly equipped to deal with undead enemies.

Upon embarking, the starting message may include; instead of the customary "ere the wolves get hungry" (where "wolves" can be also "giant eagles" or indeed any creature with the [LARGE_PREDATOR] token), the message "ere the <necromancer experiment name> get hungry". Experiments from that tower may indeed pay you a not–so–friendly visit.

Towers can be raidedv0.44.01, and the books and slab stored inside can be brought as loot, allowing your dwarves to learn necromancy without the need to play adventurer mode.

In at least one instance, the successful destruction of a nearby tower in fortress mode resulted in the biome losing it's evil nature (see discussion, "The Tale of Adil Boltmatched"). 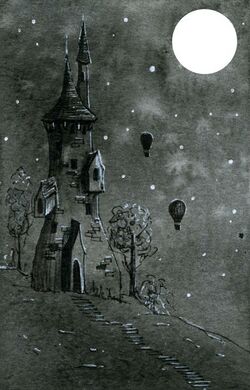 Looks much smaller on the inside.
Retrieved from "https://dwarffortresswiki.org/index.php?title=DF2014:Tower_(necromancy)&oldid=266024"
Categories:
Hidden categories: