For a visual representation, see Tile#Brook_tile. 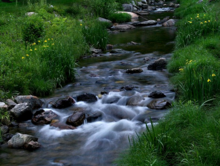 "The sound of a babbling brook makes me want to babble."

A brook is a small river that creatures and wagons can travel across without swimming. Walking across a brook will not even get you wet. (In fact, using the channel command to dig the surface away can leave stones behind, even causing cave-ins if done carelessly). A brook can easily be identified by the white and cyan tiles on its surface, as opposed to the dark blue tiles of a river. These lighter-colored tiles are a special kind of floor tile which acts like a floor grate most of the time: fluids, such as magma and water itself, will fall through it, and it can be fished through as well (remarkably, this floor also seems to support islands, even when the ground beneath that island has been mined out while the brook is in ice form, preventing the island tiles from collapsing despite the fact they are supported by nothing but water).

Water wheels and wells will not function if placed directly over a brook. In order to get a water wheel or well to work over a brook, you must dig a channel through the surface of the brook, which removes the floor tiles, making that part like a normal river.

Water flows from the upstream end of the brook at the edge of the map, while draining at the downstream end. By using k to look at the water levels at the ends of the river, you can determine which end is downstream by looking for tiles that are not full with 7/7 water. You may need to drain some water from the brook before being able to see this effect.

If water gets on top of the "floor grate" over the brook, the tiles will get mud on them and become farmable, which in itself is strange because normally water would wash away the seeds!

A screw pump is capable of drawing water from a brook without channeling its surface. This allows the brook to be left intact when setting up a pump station for the purpose of filling a reservoir somewhere.