A bed is a piece of furniture manufactured in a carpenter's workshop and then constructed on an indoor floor. A constructed bed is the base object used to designate bedrooms. Once a bedroom is set up, it may be left unassigned (to be claimed by any roomless dwarf), assigned to a dwarf, or designated as a barracks or a dormitory. Dwarves gain unhappy thoughts from sleeping without a bed and happy thoughts from having their own, high-quality bedrooms, so building beds is often a necessity for a happy fortress.

Unlike many other pieces of furniture, standard beds can only be created from wood (beds made of other materials such as metal, stone, gems, or bone only exist in the form of legendary artifacts created during strange moods). If your fortress has no surface trees, you will have to bring wood with you, or rely on subterranean trees or trade to get wood for beds. Manufacturing a bed requires one piece of wood. To construct a bed query a carpenter's workshop, assign new task, build bed.

In the first season after embark, your first dwarves will want to sleep sometime around 6 weeks after embark (around the 28th of the 2nd month by default), although the exact timing will vary between each dwarf. A beginning fortress might only need 4-5 beds for their initial 7 dwarves, although as time passes and their sleeping rhythms get more out of sync, that number drops. Although a fortress of 100 dwarves might only need a dozen or so beds to accommodate all sleepers at any one time, by the time a fortress reaches that size, some private bedrooms will, most likely, be a good idea, and bedrooms can only be defined from a bed.

It's not a big deal for a dwarf to "sleep in the dirt" that first time, but doing so will create a negative thought, and it will take a while for that thought to go away. So, just in case more bad thoughts arise later for some unlucky emo dwarf, it's always best to avoid them whenever you can. You almost certainly have better things to do than to dig out the perfect housing tract those first few weeks, so a few beds stuffed into some random corner should be more than good enough for your first seven.

Because beds may only be built indoors, a bed on the surface will need to have a floor or wall built above it before it can be constructed.

Beds can be deconstructed even while a dwarf is sleeping in them, causing the dwarf to wake up. See noise, however.

To create a bedroom from the bed, first you must build the bed as furniture. Then query the bed, make it a room, and use +/- to adjust the size of the resulting room. If, after defining a bedroom, you leave the bedroom unassigned, the next dwarf without a bedroom to sleep in the bed will claim it.

To assign the bed to a specific dwarf, create the bedroom as above, then hit assign, and choose a dwarf from the list. Green names indicate dwarves that have not been assigned beds, while brown names already have an assigned bed.

You can (re-)assign or free (unassign) a bed, even if a dwarf is sleeping in it at the time. The change in assignment will take effect when they wake up. Each bed can only be assigned to one dwarf at a time, however, it is possible for one dwarf to be assigned to multiple beds. If, after you assign a dwarf their bed, you see two dwarves listed, don't panic - it's okay, they're married, and will share that bed. Married dwarves can sleep in the same bed at the same time, along with all 34 war dogs assigned to them. 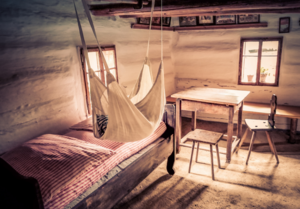 Not good enough for a noble.