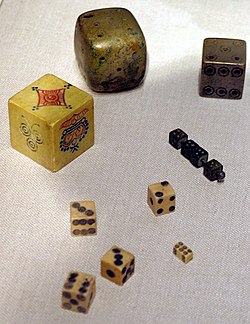 Not to be confused with Death or Dye.

Dice (singular die) are an item randomly found in religious (not titan) shrines located throughout the world, with several able to spawn at monasteries. They can be picked up and rolled to divine the will of the gods relevant to the dice, granting a variety of possible effects both positive or fun. Divination can be disallowed in advanced world generation.

In adventurer mode, dice can be found and used for divination by the player. Each die will have a series of images or series of numbers, with selection of images random, but seem to be related to the deity's spheres. Effects are tied to the specific number or image on the die, but are unique to each specific die. Therefore, rolling the same number or image on the same die after the time since last divination has expired will result in the same effect. A die with large number of faces can have several numbers or images that can do the same effect (such as bad or good luck curses). Multiple dice may be held and rolled at a time, though this only appears to count as rolling the die selected in the inventory, dropping all other dice while mentioning their number or image (but not their effect). Only dice found in shrines have any effect. Dice taken in character creation can be rolled, but won't have any special effect, giving only "You roll." text, without any additional text, as they lack any numbers or images to show after the roll.

It is likely that dice with more sides have more extreme effects; dice with fewer sides than 12[Verify] cannot cause the stronger effects (shown in bold), either good or bad. Each die can only have one very positive effect in its list of possibilities; this is dependent on the specific die, not the deity represented.

Dice do not have to be rolled at the shrine, so the player can freely take it them with them on adventures to roll later. If the player has an entirely player-made party of adventurers, each character can roll the dice individually to perform their own divinations.

Warning: each die is tied to a specific deity, not a religion, and using any dice tied to the same deity more than twice in 24 hours–1 week, even if the dice came from different religions, will anger the gods, cursing the ill-fated thrower in a similar way to toppling over a statue. Because of this, its dangerous to roll an unknown die if you recently performed a divination, as it may belong to same deity. If the player does roll the die of the same god a second time, they will get one (and only) warning; the next roll for the same god will result in the character getting cursed. However, the god(s) may choose to "ignore your hubris", resulting in no punishment. Any creature cursed by the gods in such a way will be unable to benefit from any deity's dice ever again.

You must hold the die in your hand, so either:

then Interact with the die, selecting the "roll" option.

Your character will then "Divine the will of <DEITY> according to the practice of <RELIGIOUS_ORDER>".