A dungeon, also known as a prison, its rooms known as jails, is a zone used by the justice system within your dwarven community. They are designated from a constructed restraint or metal cage, by querying the restraint, designating it as a room, and then setting it to be used for justice.

As your dwarves break the law, your Sheriff/Captain of the Guard, or any Fortress Guard, will place them in one of the designated restraints, dragging their prisoner to the dungeon regardless of their strength, or even if they transform into a werebeast halfway there. However, should they be unable to (no dungeon, dungeon is full, or if the crime is terrible enough, AND if you have one already...), the Hammerer will come to give them a severe hammer beating, which will cause quite a commotion.

Constructing a dungeon is simple. Build a few restraints, such as metal cages, chains, and ropes, then designate them as either a single dungeon or several smaller dungeons.

An imprisoned dwarf that seeks an infant may spam your announcements feed. The child may choose to enter the dungeon and sit exactly one tile away from the grieving mother, just to spite you.

The first thing to consider is the type of restraint:

The best choice of restraint is, therefore, a good strong metal chain. A high-quality chain will also let the prisoner admire it, giving them a boost to their happiness. However, one should consider the fact that if a chain or rope is not present, a hammering may be dealt out, while in any other case the punishment would be downgraded to a beating. 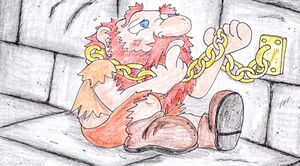 With the choice of restraint made, now we worry about the surroundings. A chained dwarf, like a chained animal, can move around in a 3x3 square centered on the chain. This allows them to use things in that space and look at items bordering it:

Eventually, save with the greatest of care and micromanagement, one or another of your nobles will run afoul of the justice system, and be imprisoned. As with a regular dwarf, this means they will be unable to make use of their regular offices and other rooms. If it turns out to be your bookkeeper, for example, then you can build a chair within their reach and designate it as their office, and that will let them continue to work. Similarly, an expedition leader or mayor, if imprisoned by a chain, can hold meetings with your liaison, and if you designate an office for them, might even be happy to do so.

You may decide that providing luxurious accommodations, jewel-encrusted chains, and fine dining to criminals, while haulers sleep on the dining room floor, does not meet your standards of dwarven justice. In such circumstances, chaining a dwarf atop a tower exposed to the elements will provide a useful lookout post. Dwarves chained in narrow hallways can also help detect ambushers, while those locked up in your dining hall make for excellent examples to the others. Should you desire to enforce capital punishment from time to time, place your prison chains inside small rooms with doors and a hole in the ceiling accessed by other dwarves. This will allow bucket-by-bucket water torture and drowning executions of any murderers or prisoners with elves in their preferences. Alternately, just lock them in a hideous dungeon to eat rats and drink from mud holes until a giant cave spider comes along and covers them in precious, precious silk.

Incidents have been reported where a falsely imprisoned human had escaped after being taught by an abbot to be a scholar and, soon after finding a ruin with lots of gold, was appointed as a count and set out to take revenge on the bookkeeper he used to work under and the human that had him locked up. Interestingly, they were said to be the count of an island, despite boats not existing. It is theorized that he swam to this island and waited for the sea to freeze before he came back with the treasure. In some versions of the tale, the son of his nemesis was actually his son.