Dragons are massive, fire-breathing megabeasts who, at their full size, are the second largest land creatures in the world (behind the giant elephant). They are covetous monsters and seek to steal items from your fortresses to bring back to their lairs. Dragons generally pilfer successfully in worldgen, but when they attack a player fortress, they will simply wipe the place out or die trying.

Dragons are most notable for their ability to quickly and often exhale long (20+ tiles) jets of dragonfire, a much-hotter (theoretically 50000 °U , over four times the heat of magma) version of fire, which can make quick work of any creature caught in its path and can kill even creatures normally immune to fire, though it can be blocked by enemies equipped with shields. All dragons are born with Talented skill in fighting, biting, kicking, dodging and observing, which, combined with their size and dragonfire, makes them formidable opponents to an untrained military squad.

While based on the western dragon model, dragons neither fly nor have wings, and are not intelligent (though there is room to address this; see Bugs and Future Plans). They are often described as glass cannons, as they are not particularly durable and can be defeated somewhat easily with skilled soldiers or traps, but only in comparison to their fellow megabeasts; a single dragon can easily wipe out an unprepared fortress. Dragons are associated with the spheres of fire and wealth, and their names will often reflect that.

They are not to be confused with the cave dragons - a separate, non-megabeast species.

Dragons slowly grow to become one of the largest creatures in the game, finally reaching their adult size of 25,000,000 cm3 after 1000 years. As a hatchling, dragons are quite tiny, at exactly 1/10th an adult dwarf's size, but they grow very rapidly, at roughly 25,000 cm3 per year. Dragons reach dwarven size shortly after their second birthday, are more than double a dwarf's size at about year 5, and add another dwarf's-worth in size roughly every two years after that.

Dragonfire can be blocked if the victim is using a shield, and it will be more than 99% of the time. Though they are among the physically weakest of the megabeasts, dragons are still massively powerful in melee combat, so they can be hard to take down without a good military. They should never be engaged in areas covered in grass or cave moss, as their breath attacks will cause fire to spread across all grass in the area, consuming your map in flames, causing trees to fall, and, above all else, murdering your FPS. When attacked by a dragon, lure it underground, preferably into an area made out of stone floors away from any farm plots. While they are immune to fire damage, dragons can still drown if immersed in magma.

Dragonfire can be avoided by fighting the dragon in a hallway that is covered in 4/7 water depth, here the dragon can not spit fire leaving it open for melee combat. 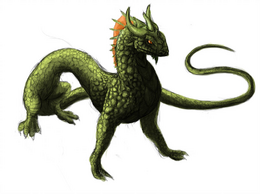 How majestic!
Art by Olivitree 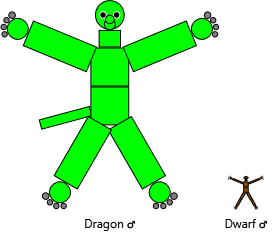 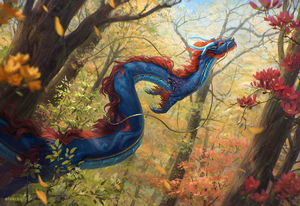