A tiny rodent that burrows by day and scurries about at night.

Hamsters are a species of hateable vermin who may be found in any area that isn't freezing. Like rats, they can pose a risk to stockpiled food, bones, and shells, and may inspire unhappy thoughts to dwarves who hold a particular antipathy towards them.

Hamsters may be captured by trappers and turned into low-value pets. They have the [GNAWER] tag, so they can escape wooden animal traps and cages. They will escape from them almost instantly, pausing the game and giving a message, so if you plan on doing any trapping on a map that has them, you should make only metal animal traps and discard all others. 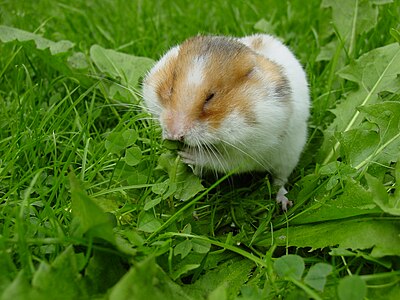 Admired for its puffy cheeks.

Rumors of miniature giant space hamsters are spreading. Reportedly, they resemble ordinary hamsters but are a distinct sentient race. As of now, it is unknown whether they are a threat, valuable pets allies, or just a rumor.