Honey bees are a type of vermin found in any area that isn't freezing, and can spawn after embark, even if not originally present. Their wild colonies can be transferred into artificial hives and used in the beekeeping industry producing royal jelly, honey and wax as end products. They can sting a nearby dwarf or animal, resulting in the death of the bee, and causing slight pain but no negative thought for the dwarf. This sometimes results in the Recover Wounded task, which may actually give a good thought to the stung dwarf.

Some dwarves like honey bees for their busy nature, their buzzing, and their ability to organize. 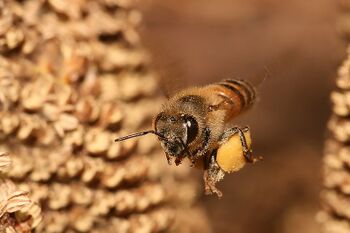