Similar to how hedgehogs can roll into a ball, pond turtles can hide in their shell.

To harvest a shell, the raw pond turtle must be processed at a fishery. This will produce a pond turtle shell and an edible pond turtle. If a pond turtle is eaten before it is processed or cooked, no shell will be produced. The described process of catching, then cleaning pond turtles is the only way to get shells from them. Processed pond turtles are categorized as fish in the stocks and status screen. The "Pond turtle" food that can be purchased from caravans is already processed and thus cannot be used to procure shells. 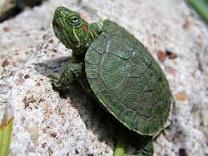 The pond turtle's elusive cousin, the mighty aquifer turtle, is just like a pond turtle but can be fished in dug aquifers. It is entirely similar to the pond turtle, but one wonders how the turtle can swim between grains of rock in the aquifer and then feed a dwarf.

These wondrous beasts seem to spontaneously generate in dug aquifers, for some reason. Maybe they don't like being in aquifers, so squeeze themselves really hard between two grains of rock?