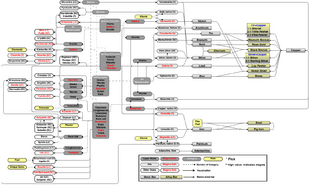 Mining can only be done in pre-existing stone or soil. Constructed walls, stairs or ramps cannot be mined; these must be removed using the 'remove construction' option (d, n)

Side view of various mining tasks. Gray/black areas represent un-mined rock, cyan/black represents mined-out areas. Solid green represents existing floor "tiles", cyan represents mined-out floor tiles. Up stairs, down stairs, and ramps are red, blue, and mustard (yellow) respectively. In each of the 9 "digging" scenarios, the dwarf miner is shown as having completed the command(s) listed in that figure, moving from left to right. Each individual command is separated by a comma ",". (The "x2" notation indicates that the command is completed twice.) The dwarf has completed those commands in the order they are listed. For example, in the bottom right figure: "Down stairs, up/down stairs, up stairs, mine x2" is five separate commands.

When tunnels are dug in soil, nothing is left from the wall-part. The floor-part will remain, if it wasn't channeled, and might be suitable for farming or sand collection.

Mining skill gain only decreases the amount of time it takes to mine each tile; it does not influence drop rate. The mason's workshop can create four blocks from each boulder, so on average you can create one block for each tile mined. Each ore stone also produces 4 metal bars at a smelter. Tasks that use stone as a raw material, however, do not receive a 4x multiplier (such as flux used for steel production).