Fisherdwarf skill level is related to the speed at which the labor is completed. Dwarves can fish through floor grates and floor bars.

Fisherdwarves will fish from any water by default. Change this using the standing orders screen under the Labor menu (y) to toggle between 'prefer fishing zones' (the default) and 'zone-only fishing', which will prevent dwarves from fishing outside of designated areas - this can be useful, for instance, if you have a crocodile-infested river, or a Terrifying ocean, and don't want your fishers wandering into danger. Fisherdwarves often get negative thoughts from being caught in the rain outside, or being exposed to dead bodies lying underwater, so designating indoors-only fishing areas will prevent this.

Fisherdwarves can produce food, craft material and extractable fish for a fortress as part of the fishing industry.

Note that while it is possible to fish from any body of water, what you get will depend on where the water is - any body of water which is not part of a river, lake, ocean, or cavern layer will always yield pond fish (i.e. turtles). If you want to catch river fish, you must fish from the river's original tiles (or perform some DFHack trickery to mark your new tiles as being part of the river).[1]

On an ocean embark, if your fisherdwarves are fishing in the caverns, and from a water area that is connected to the side of the map the ocean is on, your dwarves will catch ocean fish, including shell-bearing nautilus. This is because fish are "vermin" meaning they aren't bound by continual existence. As such, a fish that could be on any square can be fished from any other square. An indoor pond on an embark with a river should provide some river fish. It appears that fish-vermin cannot be caught, unless the tile you are fishing from is connected to a "water source" tile on the edge of the map. 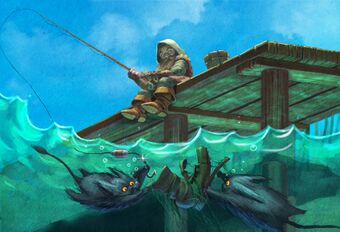 It's reel easy for dwarves to get hooked on fishing.
Art by Sexy-dwarves-united

Fishing requires no equipment, as Fisherdwarves have developed a highly superior fishing method. When tasked, the dwarf will go out to a body of water they have picked and wade in, knee deep. The dwarf then simply lowers his prestigious beard into the water and waits. Inevitably, a fish will arrive, attracted by the remains of the dwarf's last meal still lodged in his beard. When the fish makes the fatal error of attempting to acquire this morsel, it is hopelessly entangled. (In some kobold societies, they fish exclusively with nets made from dwarf beard hair.) The only flaw in this method is that devilish carp have learned to drag dwarves into rivers by their beard. In some instances, when the carp rips out a significant portion of the Fisherdwarf's beard, he will simply allow himself to drown. Most dwarves see this as more honorable than returning home in horrible beardless shame.