Urist McGhost, Ghostly Cheesemaker has risen and is haunting the fortress!

Ghosts Ñ are a type of night creature and the spiritual essence of an intelligent creature. After the death of an intelligent creature (or a dwarf) who is a member of your civilization, its soul may come back as a ghost, who will proceed to haunt the place of its death. In a dwarven fortress, dead dwarves have a chance of returning as ghosts if they are not properly buried or memorialized after their death. Ghosts often take to haunting their relatives and friends, following them around on the same tile, as well as lingering wistfully near areas they frequented in life or the spot they died. Some even continue to perform their jobs.Bug:6354 However, not all ghosts bear their anguish calmly. When a spirit has finally been calmed, the following message appears:
Urist McGhost, Ghostly Cheesemaker has been put to rest.

Ghosts are able to pass through walls, doors, floors, and other impassable tiles. They can open hatches (even when mechanically-linkedBug:8458) and unlock any locked doors that they happen to pass throughBug:4773. Ghosts may block building constructionBug:6417 and immigrant arrival.Bug:5568

Ghosts are generally immune to harm (except for a few bugs). They can be targeted in the Squad kill screen (s,k) even though they won't actually be attacked. Ghosts can be dismissed by burying the remains or by constructing, engraving and building slabs in memory of the deceased. Ghosts of visitors will eventually choose to "leave" the site once their "visit" timer expires.

Ghosts haunting the fortress will occasionally perform some of the following actions, based on their temperament:

The ghost's activities may be determined by the nature of its death and its personality traits using the following table, in order:

If a ghost is put to rest and subsequently re-raised (by deconstructing its coffin or slab), it will eventually return as a Murderous Ghost.

Dwarven ghosts would likely be classified as Wraiths by modern ghost hunters, as they can travel through walls and they are not known to leave fingerprints, reduce the ambient temperature around them, or write disturbing messages in nearby books.

If you revisit your fortress during adventurer mode, the ghosts found previously will still remain. Take care! The ghosts may attempt to 'scare you to death' almost instantly. Note that creatures with NOFEAR are immune to this attack.

When a dwarf dies and becomes a ghost, its Legends mode entry lists it as a "ghostly" dwarf. All actions taken by the dwarf during both life and death will then be attributed to the ghostly dwarf. This will generate messages like "the ghostly dwarf Urist McHauntypants arrived in Cagesyrups" even when the dwarf was obviously not a ghost yet when it immigratedBug:5276. 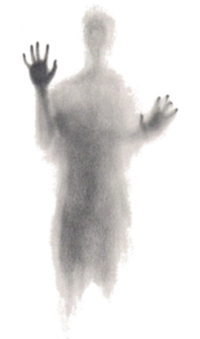 Using external utilities like DFHack's ghostly command, it is possible to turn your adventurer into a ghost. When playing as a ghost, you will be able to pass through walls, but only if you have no items in inventory. Other creatures will ignore you, as they can't harm you and you will be unable to attack them, either. However, you will be capable of harming others if your character can perform a suitable interaction, like poison gas, fire breath, or a directly applied syndrome. Flying as a ghost seems to have some issues, because your ghostly adventurer will become stuck in mid-air forever, unless they are a creature that can normally fly. Other aspects of the game seem to work as usual.