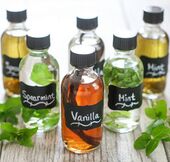 Gnomeblight can be created from Kobold bulbs at a still via "Extract from plant", requiring a vial and a dwarf with the Plant gathering labor enabled:

Birdmen Scholars have theorized a way of extracting from elves, possibly using gems and a source of power. Though this would be a great service to the world, (plus all that tasty elf juice to sell for aforementioned Armok-pleasing blood barrels) unfortunately no such machine has been devised.