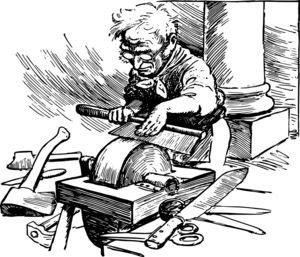 Metalsmith is a category profession that encompasses any or all skills relating to the smelting of metals and alloys and the crafting of various metal products, including metal armor and weapons, metal furniture, chains, metal toys, buckets and barrels, metal bars or blocks, and so on. Although each of these may require a separate skill to produce, they are all grouped together under the profession of "Metalsmith".

The 5 metalsmith skills are:

An adult dwarf whose best skill is in this category, and who has accumulated ranks in other metalsmithing skills*, will be labeled with the "Metalsmith" profession and known as a metalsmith. If a dwarf has experience in only one metalsmithing skill and that is her/his highest skill, s/he will be known by that skill. If a dwarf has several metalsmith skills, once they achieve "grand master" skill (Rank 14) in one of these skills, but not in any of the others, s/he will then be known by that specific skill.

(* exactly how much is not clear)

Dwarves with any metalsmithing labor, excluding furnace operating, are needed to construct many types of metal buildings if they are made of metal: these include trade depots, bridges, furnaces, and wells. (see "known bug" below).