Requirements for a monarch's arrival can be checked by pressing n c after a fortress has reached a certain wealth. A fortress may not need to be a metropolis in order for this to happen.[1] These requirements notably do not apply when one of your fortress residents is elevated to monarch.

An adventurer can become a monarch; if they succeed in persuading the current one to yield, the monarch may then offer their position to the adventurer. (Whether they yield or offer may depend on the relative personalities and social skills.[Verify])

Once the monarch arrives and all room requirements are met, the player will be prompted to find 'seven symbols not of this world' as well as to construct a 'true throne'. These symbols can be found inside an unusual volcanic wall. 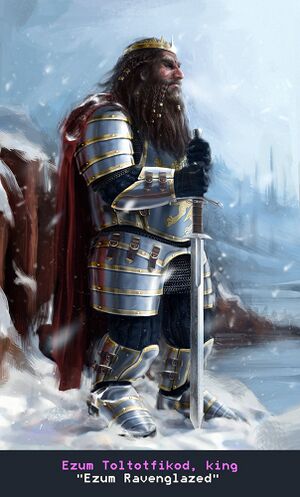 Artist rendering of a dwarf king by Mechlin (post)

The arrival of the Monarch is not necessarily an advantage for a fortress, as it comes with a significant risk of an accidental loyalty cascade.

If a dwarf goes berserk, or, during a tantrum, attacks a member of the Monarch's entourage, a loyalty cascade can be triggered. This can be particularly fun as the entourage can include several dwarves with high proficiency in military skills.